John Wall Has a Photographic Memory 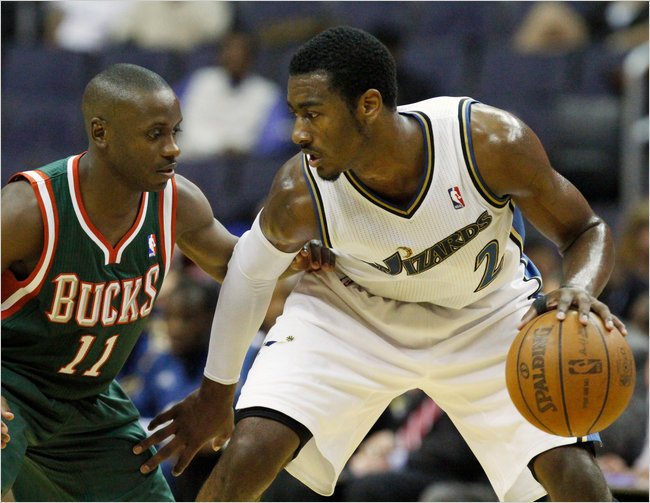 NEW YORK — In addition to his supersonic speed and killer instinct, it turns out John Wall may also possess a photographic memory. So says Washington Wizards coach Flip Saunders. “He’s got an extremely high basketball IQ and it seems like he’s got a photographic memory,” Saunders said before Wall put up 19 points, six assists and five rebounds in the Wizards’ 92-90 loss to the Knicks Sunday night at Madison Square Garden. Asked if Wall’s ability to remember plays was unique among NBA players, Saunders said: “It’s very uncommon. You still have guys in the sixth month of the season going through plays and they can’t still remember where they’re supposed to go. We show a play one time and he knows where’s everyone’s supposed to be.” The No. 1 overall pick out of Kentucky, Wall looked very impressive in his pro debut at the Garden, racing upcourt to score transition layups in three or four seconds at a time and directing the offense in the absence of Gilbert Arenas. The 6-foot-4 Wall is averaging 16.2 points, 8.0 assists and 2.2 steals, while committing 3.5 turnovers a game. “He’s probably one of the fastest, most physically gifted players that we’ll have in the league,” Knicks coach Mike D’Antoni said. D’Antoni added, “I hope he never learns to shoot real well, because then, he would be unguardable.” Arenas, who was reportedly fined $50,000 for faking an injury last week so teammate Nick Young could start, is now actually sidelined with a groin injury. He declined to speak with reporters before the game. In his absence, Saunders has relied on Wall and former Kansas guard Kirk Hinrich, whom the team calls “Elmer” because of his ability to serve as an effective glue player.” “I don’t want nobody to say it’s my team or I’m the main guy on the team,” Wall said. “I just want to be the leader and have this team get back to where” they were before. The Wizards are in a state of major transition. They have a new owner in Ted Leonsis. The fate of Arenas, who was suspended 50 games last season for bringing guns into the locker room, seems to get cloudier every day. Washington has one of the league’s youngest rosters at an average age of 24.4 years. And Leonsis has even talked of changing the team name. Into that situation has stepped Wall. Yet Saunders said Wall’s experience at Kentucky, where he played for a high-profile coach in John Calipari, and alongside four other first-round draft picks, has prepared him for his new surroundings. “If you played at Kentucky with that environment and the situation, the focus that was on that team, that probably prepared him as much as any No. 1 pick coming out for being able to deal with that situation,” Saunders said. “He goes about it just like a 20-year-old kid, having fun playing, having fun hanging out with his teammates, going through situations. “The difference is he is a very mature 20-year-old. He’s our leader. He’s very vocal in practice, very demanding of players, both veteran and young guys. He knows how the game is supposed to be played and if they don’t play it or don’t practice at a certain level, he’s not afraid to voice his opinion to those players. So that’s definitely a positive from a coaching standpoint.” Despite the hype surrounding him, Wall said he didn’t have any expectations for himself, only for the team. “I don’t really care about my expectations for myself,” he said. “The main thing I can do is go out there and play basketball like I know how to, try to get better every day individually.” Follow Adam Zagoria on Twitter

All Signs Point to Miller to Baylor (UPDATED)