Sonny Vaccaro, once the most powerful man in grassroots basketball, is poised to return to the summer scene and possibly partner with Chinese apparel manufacturer Li Ning. Vaccaro, who turns 71 Thursday, declined to mention specific potential partners, but says he has appointments Monday with “people who would like to get totally involved.” “I believe there are going to be opportunities for me to be involved in things next summer,” Vaccaro said Wednesday night by phone from his home in Carmel, Calif. “I don’t know exactly if I will do them or how I’ll do them, but I do know there’s a lot of interest and I’m going to listen.” CBSSports.com first reported the development last month. Vaccaro already has an informal network of travel coaches and summer power brokers in place, including Keith Easterwood in Memphis and Gary Charles in New York City. “I’m gonna do whatever Sonny does,” Easterwood said by phone. Easterwood said he’s already spoken with some AAU programs currently affiliated with Nike and wouldn’t be surprised if they “jumped ship” to join Vaccaro. “It’s going to shock me if some of these programs don’t jump ship,” Easterwood said. “That’s a distinct possibility. I’ve talked to people outside of the city [of Memphis] who have traditionally had Nike programs. “Because their contracts expired last month they’re going to listen to what’s best for them and their basketball team.” 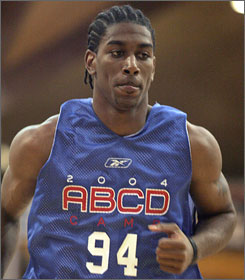 Vaccaro’s comeback could include the return of the vaunted ABCD Camp – which was held at Fairleigh Dickinson University in Hackensack, N.J. until 2006 and featured Kobe Bryant, LeBron James, Tracy McGrady, O.J. Mayo, Sebastian Telfair and Lance Stephenson. “That’s a great location for media to get in and out of,” Easterwood said. “Everything that goes on in New York seems to be magnified. LeBron played there. Kobe and McGrady and Marbury and Telfair played there. All that is there and more. In the Internet age, kids are geeked into the history of the game and who did what.” Vaccaro revolutionized grassroots basketball and the marketing of hoops stars by signing Bryant and Michael Jordan to multi-million dollar sneaker deals. He pioneered the practice of paying college coaches to outfit their teams in shoe company apparel while working for Nike and Phil Knight. In 1992, he declared war on Nike when he joined rival adidas, taking his Roundball Classic, Big Time tournament and summer camp with him. He later left adidas for Reebok before retiring from the summer scene in 2006. “It’ll never be what it was,” Vaccaro said. “It won’t be ABCD Camp, Roundball Classic, Big Time tournament. It will be situations like that that will allow a lot of kids to be involved. There are a lot of lot people who run these things who with a little help can do what was done in the ‘80s and ‘90s. But it will be different.” Since he departed the scene, Nike has virtually dominated the summer landscape and Vaccaro is once again taking aim at the sneaker giant. He said he hoped to provide a forum for other, lesser-known players to display their potential. “While they [Nike] took care of the chosen ones, they let the less fortunate get away,” Vaccaro said. “You always need your stars, but you need your guys who want to be your headliners and that’s what summer basketball is.” While Under Armour and other companies have reached out, Vaccaro has already met with representatives of Li Ning, sources said. The meetings were delayed when Vaccaro’s wife, Pam, was hospitalized for a medical issue. But she is now home and resting comfortably.

The Chinese company, founded in 1990 by the former Chinese gymnast for whom it is named, recently signed Philadelphia 76ers rookie Evan Turner to a multi-million dollar sponsorship deal and is making an aggressive push in the U.S. to counter Nike’s move into China. “This is truly a game-changing moment for the Li Ning brand,” the China Daily quoted Li Ning’s brand director for basketball, Brian Cupps, as saying. “Adding a supreme young talent like Evan Turner sends a message to the global basketball community that Li Ning basketball is committed to being a player on the global stage.” Still, many questions surround a potential Vaccaro/Li Ning partnership. First and foremost is that Li Ning is a virtually unknown entity in the U.S. “Li Ning has almost zero American recognition,” one industry source said. “The product line would have to be substantially revamped.” Second, the source said, Vaccaro might have to get used to working on a smaller budget than he enjoyed at Nike, adidas or Reebok. “His definition of camp is a $250,000 camp,” the source said. “There are a lot of things that have changed since he left. “I think he wants to come back in a big way and is Li Ning going to allow him to come back in that big way or can he compromise and come back with less? The new economy is doing more with less. I’m not sure he’s used to doing that or is gonna be happy with that. “He wants to do things first-class. He might have to put the kids at the Days Inn instead of the Four Seasons. You might have to pay coaches $300 instead of $500. Those days are over. You might have to do a three-day event instead of six days. “He’s used to spending everybody’s else’s money. He thinks that money’s still out there. He can do what he did before and he can do it for less if he’s more crafty and smart about it. That’s gonna be the issue.” Time is another concern. “It may take him two or three years,” the source said. “And then again, Sonny’s not young anymore, either. Do they have the money? Do they have the patience? It may take four or five years.” Still, after three years away from grassroots basketball, Sonny Vaccaro remains a force to be reckoned with. “If he comes back,” the source said, “there could be some casualties.” Follow Adam Zagoria on Twitter