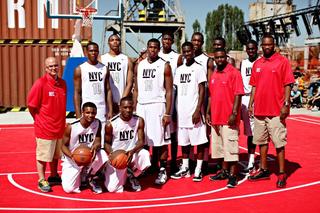 Uncommitted senior wing Jermaine Sanders of Rice High School and Rutgers-bound forward Kadeem Jack of South Kent (Conn.) helped lead Team NYC to a 74-65 victory over Turkish U19 champions Efes Pilsen on Thursday for the World Basketball Festival championship in Istanbul, Turkey. The 6-foot-5 Sanders led all scorers with 21 points and the 6-9 Jack posted 18 points and 11 rebounds. Corey Edwards of Christ the King added eight assists. Sanders and Jack were named Co-MVPs. The game was played outdoors at 11:30 a.m. before an estimated crowd of 500. “Overall everybody play well,” said head coach Kimani Young of New Heights and Rice High School. “Those guys [Sanders and Jack] stood out. They just got a little more done. It was a great test for both of those guys.” Ten New York players made the trip, including Boys & Girls guard Mike Taylor. “It was a great test for everybody,” Young said. “To compete against top talent from Europe had to be an eye opener for those guys. That team, they were athletic. It surprised us that they were so in tune with the game and our dribble moves. There were a few oohs and aahs from moves that they made just as there were from moves we made.” During the trip from Aug. 29-Sept. 3, the New York players also watched Team USA twice in the FIBA World Championship, in wins over Brazil and Tunisia. FREE THROWS St. Benedict’s forward Tyler Harris is on an unofficial Saturday to UConn…Daniel Ochefu is also visiting Georgetown, per Alex Kline. (Photo courtesy Dorothy Hong) Follow Adam Zagoria on Twitter