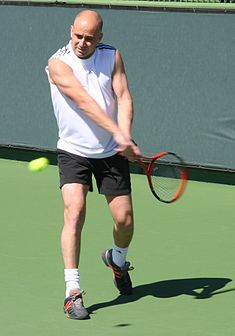 NEW YORK — Andre Agassi made a surprise appearance Wednesday night at the U.S. Open. The two-time former champ and eight-time Grand Slam winner drove up in a black Chevy Suburban and then signed copies of his autobiography, “Open,” for an hour as a line of autograph-seeking fans stretched halfway into the food court. “It always feels good” to be here,  Agassi, 40, said soon after stepping out of the car. Agassi, who becomes eligible for the Tennis Hall of Fame in 2011, played his last match in Flushing Meadows in 2006, losing in four sets to 112th-ranked Benjamin Becker in the third round. “My mind races back to all these incredible moments out there,” Agassi said in an interview with Justin Gimelstob on The Tennis Channel. “The four tiebreakers with Pete [Sampras]. The night matches always come to mind. But my last match that I played here, saying goodbye, something I’ve done my whole life. Saying goodbye to the people I’ve know my whole life. I think that really stands out.” On a day when American teenager Ryan Harrison and No. 20 seed Sam Querrey won on the men’s side, Agassi kept a relatively low profile. He gave no interviews other than the Tennis Channel one and wasn’t scheduled to appear in Arthur Ashe Stadium. “Here in New York, I’m telling you they’re so uninterested in the tennis and then all of a sudden, boom, like somebody just told them, ‘Right now, pay attention,'” Agassi said. “They’re an educated crowd and there’s nothing louder than 23,000 quiet New Yorkers, let me tell you. They can rattle the best of us.” Agassi won the Open in 1994 and ’99. “My recollections are I wish I would’ve won three sets and not two,” Todd Martin quipped of the ’99 final. “It was a great match. I played awfully well all tournament, but in many ways I played my best match that evening. “And he was just much too good for me, once again.” One of Agassi’smost memorable matches came in a the 2005 quarterfinals when he came from two sets down to beat fellow American James Blake in five sets in a match that ended at 1:15 a.m. Agassi ultimately lost in the final to Roger Federer. “I think we all remember the match against Andre,” Andy Roddick said of the Blake match. “It was just great. It was great tennis. The storylines were great, because James was coming back and everything. You know, the drama of the night session at the U.S. Open is about as good as you can get.” Agassi, who is married to fellow tennis legend Steffi Graf, also informed the younger generation of players like Roddick, Blake and Mardy Fish about how to act and behave as a champion. He set up the Andre Agassi Foundation, which is focused on transforming education locally in Las Vegas and nationally to create greater opportunities for children. “My whole world is built around my foundation,” Agassi said. “We’re getting pretty close to finalizing something that will have a national impact on public education.” Fish, 28, said Agassi had a major impact on the Americans of his generation. “He’s shown a lot of us how to give back to the sport that has given us a lot,” Fish said. Roddick, in turn, has tried to transmit those values to a younger generation of players, like Harrison, who dispatched No. 15 Ivan Lubijic in four sets. “I think all the young guys know that if they have a question, I’m always happy to answer it,” Roddick said. “I think that’s pretty consistent with how Andre was with me. So I kind of followed his lead on that.” Top-seeded Rafael Nadal is seeking to replicate Agassi’s accomplishment of winning all four majors by winning his first U.S. Open. Only six men in the history of tennis have won all four Slams. Federer, the No. 2 seed, is looking to regain the Open crown he won five times in a row from 2004-08 and extend his record number of majors to 17. “I’ve pulled myself out of the game of guessing what Roger” can do next, Agassi said. “He continually amazes me. He doesn’t surprise me anymore.” He added of Nadal: “Nadal this time of year, hopefully he’s healthy to continue with his best in New York. It would be awesome for the game.” Follow Adam Zagoria on Twitter.