Ewing to the Knicks; Three Suspended 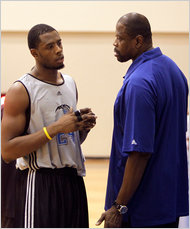 The Knicks signed Patrick Ewing on Friday. No, it’s not 1985 all over again. New York inked Patrick Ewing Jr. to a contract and also added 6-foot-7 G/F forward Landry Fields. The 6-8, 240-pound Ewing Jr. was with the Knicks during the 2008 preseason, but was cut two days before  the season opener. He headed to the NBA Development League and averaged 16.8 points and 8.9 rebounds in 30 games for the Reno Bighorns. He then tore the MCL in his right knee in March 2009 and spent the next 16 months rehabilitating. Ewing averaged 4.8 points over 11.3 minutes in four games for the Knicks entry at the 2010 NBA Summer League in Las Vegas and averaged 11.3 points over 27.3 minutes for Orlando’s entry at the 2010 Orlando Pro Summer League.. Ewing signed a partially guaranteed contract and will compete for the 15th and final roster spot. Fields played four seasons for Stanford University and averaged 22.0 points and 8.8 points as a senior in 2009-10. The team currently has 15 players listed on its roster heading into training camp next month in Greenburgh, N.Y. THREE PLAYERS SUSPENDED (AP) — Brandon Rush of the Indiana Pacers was suspended five games by the NBA for violating the league’s drug agreement, and Tyreke Evans of the Sacramento Kings and Kenny Hasbrouck of the Miami Heat got suspended for driving offenses. Evans, the rookie of the year, was suspended without pay for one game for pleading no contest to reckless driving in California. Hasbrouck, a former Siena guard, was suspended without pay for two games for pleading guilty to DWI in New York. (Photo courtesy AP) Follow Adam Zagoria on Twitter