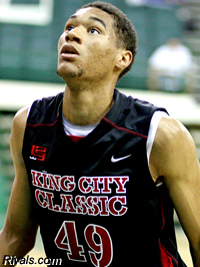 Malcolm Gilbert, a 6-foot-11, 225-pound center from Academy of the New Church outside Philly, verbally committed to Pittsburgh Monday evening. “I called coach [Jamie] Dixon and I told him I wanted to come to Pitt,” Gilbert, the No. 17 center in the Class of 2011, said by phone. “It’s just a great school, great program, great tradition and it has what I need to take the next steps to achieve my goals.” Gilbert chose Pitt over Virginia Tech, Ohio State, Wake Forest, Virginia and Clemson. Asked what skill-set he will bring, Gilbert said: “Just a big defensive presence. I have great touch on my jump shot and I’m working on my hook shot. I’ve been working on my footwork. I can be an outstanding presence in the post.” “He’s intriguing because of his upside,” East Coach Elite coach Terrell Myers said in June. “What people don’t understand is, they see 6-11, they look at him as an offensive player. He’s not an offensive player, he’s a defensive player. “He can score the ball but I don’t think you’re going to throw it in and get Dwight Howard or Hakeem Olajuwon. That’s not who he is. Maybe you’re looking at more of a Greg Oden-type once he bulks up. He’s definitely similar to him.” Still, Gilbert said he wants to improve his offensive game going forward. “Most definitely,” he said. “I have a great touch on my jump shot. I can step out and hit that 10-footer and 15-footer. I’m getting progressively better on the offensive end as far as scoring around the basket. I do think I’ll get progressively better on the offensive end.” Gilbert is the second big man from Academy of the New Church to verbal this summer, following Rakeem Christmas who chose Syracuse. Follow Adam Zagoria on Twitter