T-Mac Appears Headed to the Bulls 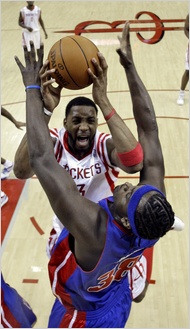 Tracy McGrady worked out with the Chicago Bulls Monday and is now waiting on an offer from the franchise, ESPN.com reported. McGrady, 31, joined the Knicks for 24 games last season after he was acquired from the Houston Rockets at the trade deadline. The Bulls are ready to offer McGrady a contract if his knees look healthy and he is prepared to come off the bench, ESPN.com reported. McGrady came off microfracture knee surgery and had a limited role in New York. “This was a great team, a pretty good team, without adding myself and Carlos Boozer, and some of the key players that they added this offseason,” T-Mac told ESPN.com. “You bring a coach in like [Tom] Thibodeau, who’s very defensive minded, very smart and knows the game, knows what to get out of his players. I think we can be really good, I really do.” Follow Adam Zagoria on Twitter.

The Sickest Catch You'll Ever See?