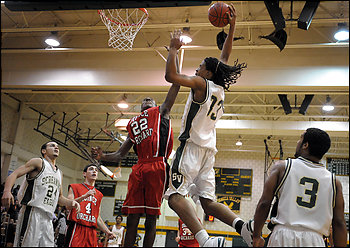 Jordan Goodman, a 6-foot-8, 207-pound combo forward from Washington D.C., has verbally committed to Rutgers beginning in 2012. He initially committed to Georgetown but decommitted after David Cox left that school and became associate head coach at Rutgers. “It had something to do with him and meeting Coach [Mike] Rice and all the teammates and everything,” Goodman said by phone. Damon Handon, a director with the DC Assault AAU program, said Rutgers was getting one of the Top 10 players in the Class of 2012, even though he is not ranked as such. “In my opinion, he’s one of the Top 10 players in that class, no doubt about it,” Handon said. Rutgers is getting a Top 10 player.” He added:  “He’ll bring some versatility. He can play on the perimeter as well as play on the inside. I think he’ll cause some matchup problems when you play him at the four because he can step out and shoot the 3. A lot of four men have a difficult time guarding him. I also think his best basketball is definitely ahead of him.” Goodman said he feels comfortable on the wing and in the post. “Whatever position they need me to play, that’s what I’ll play,” he said. “I’m more of a wing player but can go in the post.” Deon Goodman, Jordan’s father, cited the relationship with Cox as a key factor. “Mr. Cox is from our area and he’s recruited players from our area and he’s been very diligent working with Jordan and seeing that Jordan was focused on school and getting things done,” Deon said. “They developed a personal relationship together. He’s been a very, very good mentor for Jordan. He wants to make sure he’s putting the work in.  Whatever he needed as a mentor.” Added Jordan: “He’s a big influence on a lot of stuff I do. He’s kind of like a big brother and mentor and he looks out for me.” Handon said it remains uncertain where Goodman, who has attended four high schools, will go to school next season, but mentioned Burlington (NJ) Life Center, Raleigh (N.C.) Word of God Academy and Quality Education (N.C.) Academy as options. Deon Goodman said he wanted to get his son out of the D.C. area. “We’re trying to relocate him to get him into the suburbs, somewhere in New Jersey or somewhere in North Carolina,” he said. “We have to get Jordan out of here. We have to put him in a more secluded place so he can focus more on his books and his academics instead of the inner-city life.” Deon Goodman said Jordan had been through some tough times since his mother passed away several years ago. “We relocated after his mother passed,” he said. Jordan said he hoped to spend the next two years in the same place. “I’ve been here a long time,” he said of D.C. “I’m trying to see something new. I heard basketball down there [in North Carolina] is a good thing. It’s better competition for me and will be better for me to play down there. “My last two years are going to be in the same place.” Handon called Goodman a “great kid” and said he was a solid piece for Rice to build on going forward. “That’s a great start for Mike Rice’s tenure at Rutgers University to get a kid of that caliber going into his junior year,” he said. “He’s a great kid.” IONA PICKS UP 6-4 WING DEZOUVRE

Iona has landed a commitment from Randy Dezouvre, a 6-4 wing originally from Montreal who played at Monroe College in The Bronx. “He is a tough, physical guard who is a lock-down defender who can guard [positions] 1-4,” said Monroe assistant coach Brock Erickson. “He is a hard worker who is willing to do all the dirty work to win.” Dezouvre originally signed with Rhode Island out of high school. This time around, he had offers from Robert Morris and LIU. He averaged 11 points and 4 rebounds for a Monroe team that went 29-7 and finished ranked No. 7 in the nation among JUCOs. He joins Djim Bandoumel (Idaho) and Tyrone Nared (Oregon) as Division 1 signees out of Monroe. Follow Adam Zagoria on Twitter