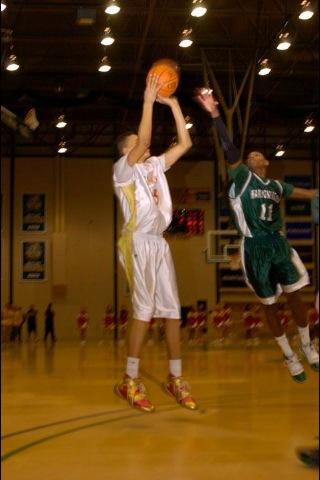 Tyler Harris isn’t just Tobias’ younger brother. The 6-foot-8 Harris — and the brother of Tennessee-bound forward Tobias Harris — is making a name for himself as one of the top ballers in the New York area. The No. 16 small forward in the Class of 2011 out of Dix Hills (N.Y.) Half Hollow Hills West, Harris recently picked up scholarship offers from N.C. State, Virginia Tech and South Florida, according to his father, Torrel. He previously held offers from UConn, Seton Hall, Tennessee, Duquesne, Fordham, Hofstra and Boston College. Among the schools showing interest are Georgia Tech, Maryland, Wisconsin, UCLA and George Mason, Iowa, West Virginia and St. John’s. “Everything is open right now,” Torrel Harris said of the schools. Harris played well in the recent EYBL in Los Angeles, helping the Albany City Rocks go 4-1 to advance to the Peach Jam next month. He averaged 25 points, 8 rebounds and 4 assists per game, including a 30-point game against the Memphis YOMCA. “He was probably our leading scorer for the five games,” City Rocks coach Jim Hart said. “He was consistent. He shot well from the perimeter. He rebounded. He’s multi-skilled on offense. He rebounds well. When he adds strength and more intensity he’s going to be a real good player. “His skills and his ballhandling are really good. Once he gets that killer instinct like his brother, he’s going to be a real solid high-major player.” RUTGERS NOTES / FREE THROWS Rice High senior forward Kadeem Jack is on an unofficial visit to Rutgers Wednesday afternoon. The latest word from the Jack camp was that he would attend South Kent (Conn.) next season and head to college in 2011…Former Fordham and Hofstra assistant Van Macon was officially named to the Rutgers staff Wednesday…Rutgers will host 2009 NCAA champ North Carolina Dec. 28 at Madison Square Garden…Kyle Cain, the 6-7 forward out of New Hampton (N.H.) Prep, begins his official visit to Arizona State Wednesday…St. Benedicts Prep coach Roshown McLeod will retain longtime Dan Hurley assistant Joe Sokolewicz. (Photo courtesy Torrel Harris) Follow Adam Zagoria on Twitter.