A source close to Lavin said Polee was the “best athlete” he’s ever recruited.

Polee led the Comets to their second straight CIF State Division I title and averaged  21 points, eight rebounds and two blocks per game.

Indianapolis Pike junior point guard Marquis Teague became the latest elite player to pick Kentucky Thursday when he made the announcement at his high school.

“[Kentucky coach John Calipari] coaches guards real well and I want to be a great guard when it’s all said and done,” the 6-foot-2 Teague said, according to Jody Demling’s Twitter.

Teague added that he’s not thinking about “one-and-done.” He just wants “to win.”

Biruta to Remain at Rutgers (UPDATED)

“I am definitely coming to Rutgers,” Biruta told Jerry Carino of Gannett New Jersey after the story was first reported here. “I’m excited to see who the new coach is.”

The 6-foot-8, 240-pound forward from St. Benedict’s Prep had initially asked to be released from his Letter of Intent.

He went so far as to list the schools he was considering going to.

Tony Wroten says he knows where Marquis Teague is going.

And Wroten says Teague will announce today (Thursday) for Kentucky over Louisville, Indiana, Cincinnati and Purdue.

“Yessir. Mr.teague will b a kentucky wildcat. Its final,” Wroten wrote on his Twitter.

The 6-foot-2 Teague of Indianapolis Pike is the No. 1 point guard in the Class of 2011 and the No. 2 overall player, according to Rivals.

Kentucky has already secured a commitment from Michael Gilchrist, the No. 1 player in the Class of 2011 out of Elizabeth (N.J.) St. Patrick.

Leslie Down to 3, UConn Visit This Weekend (UPDATED)

C.J. Leslie is down to three schools and will visit UConn this weekend.

The 6-foot-7 Leslie was supposed to visit Florida on Sunday following the Jordan Brand Classic in New York but that trip was cancelled after the Gators landed 6-7 big man Will Yeguete of Florida Air Academy and 6-8 power forward Cody Larson of Roosevelt H.S. (SD).

TARRYTOWN, N.Y. — When Herb Pope, Jeremy Hazell and Jeff Robinson all said they would test the NBA waters in the wake of Bobby Gonzalez’s firing last month, the immediate future looked bleak for Seton Hall.

After all, those three players accounted for 44 points and 19 rebounds a game last season.

Yet a few weeks removed from those pronouncements, it now looks as if all three players could return to play for first-year coach Kevin Willard.

“Now that I know Coach Willard a little more, now I kind of feel obligated to give him the best chance of me coming back and really look at it,” Pope said Wednesday at the Metropolitan Basketball Writers Association awards banquet. 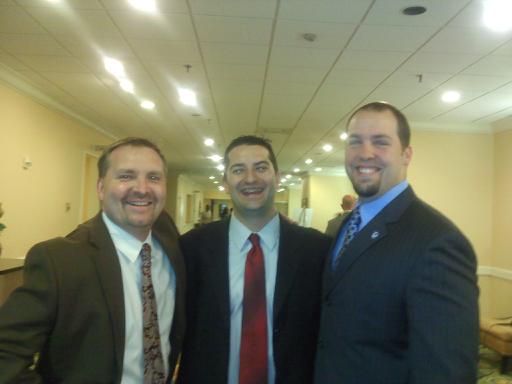 TARRYTOWN, N.Y. –The three gentlemen in this picture are all working with new coaches.

Is that why they’re smiling?

From left to right, Kevin Lorincz of Rutgers, Mark Fratto of St. John’s and Matt Sweeney of Seton Hall are three of the best sports information guys in the business.

This photo was snapped Wednesday night at the Metropolitan Basketball Writers Association awards dinner at the Westchester Marriott.

The metropolitan area has witnessed a massive game of coaching musical chairs in recent weeks and virtually every new Division 1 coach in New York and New Jersey was on hand for this annual event put together by Chuck Stogel.