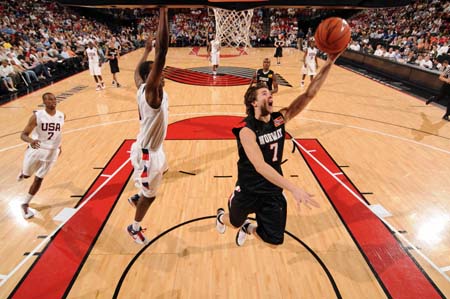 If the Seton Hall basketball team has a distinctly European feel to it next year, don’t be surprised. The Pirates are involved with Torgrim Sommerfeldt, a 6-foot-6 shooting guard from Norway, and Ozan Dilik, a 6-4 point guard from Turkey. Sommerfeldt visited the South Orange, N.J. campus last weekend and will likely choose from among Seton Hall, Rutgers, FDU and Florida International in the coming weeks. “It looks like Rutgers or Seton Hall,” said Matt Fisher, Sommerfeldt’s Baltimore-based mentor. “He had a great visit at Seton Hall. They blew him away. Those guys are pretty impressive.” Sommerfeldt is currently back at NTG Sports Academy in Oslo, where he’s doing a prep year and is coached by Fisher’s brother, Ty. The 6-6, 205-pound Sommerfeldt previously committed to Wake Forest but never landed at the ACC school. “They wanted him to redshirt,” Matt Fisher said. “We both decided to go back and revisit things.” Sommerfeldt had surgery in late 2008 on both knees, but still hasn’t fully recovered. Still, numerous schools have called, but Fisher said Rutgers and Seton Hall lead the list, with FDU coach Greg “Shoes” Vetrone getting in the mix recently. Sommerfeldt also visited FIU and head coach Isiah Thomas during his American visit. As for Rutgers, Fisher said, “We’re waiting to see who the coach is going to be at Rutgers.” Dilik is a 6-4 point guard from Turkey who plays at Huntington (West Va.) Prep. He visited Cincinnati last weekend and is trying to set up visits to Seton Hall and Oregon soon. “He’s a very physical point guard,” Huntington Prep coach Rob Fulford said. “He gets to the basket any time he wants to. He’s a great shooter, a good pick-and-roll player, a very aggressive point guard. “He needs to work on his foot speed, but he’s physically imposing on smaller guards.” (Photo courtesy SBNation.com) Follow Adam Zagoria on Twitter.

Jordan Out of Mix at Rutgers