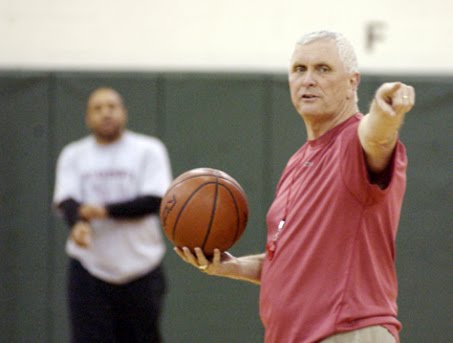 As first reported here Saturday, legendary St. Anthony coach Bob Hurley is serving as an unofficial adviser to Seton Hall in its search for a new head coach. Hurley, 62, spoke with Seton Hall officials over the weekend. He politely declined to say whether he spoke with Seton Hall AD Joe Quinlan or Pat Hobbs, the Dean of the Law School. Hurley previously said he and Quinlan have a close relationship. Hurley said he didn’t endorse a particular candidate. “We talked about the position,” Hurley said Tuesday. “I just gave my feelings about the type of person that they need to hire.” Hurley added that “there’s a list of about six guys that they’re interested in talking to.” Mike Rice of Robert Morris will interview Wednesday. Siena’s Fran McCaffery,  Richmond’s Chris Mooney, Hofstra’s Tom Pecora, Cornell’s Steve Donahue and Kansas assistant Joe Dooley could also be in the mix, although Hurley declined to name the list. The New York Post reported Tuesday that Seton Hall had already spoken with McCaffery and  Mooney. “Mike is involved with both Fordham and Seton Hall,” Hurley said of Rice. “I would love to see him get one of those. He’s a good friend and I’m sure he’d be good at either school. I think he’s destined to move up the ladder.” Hurley reiterated that the new staff would need to have strong bonds with head coaches in New Jersey, especially those at St. Anthony, St. Patrick, St. Benedict’s, Paterson Catholic and Seton Hall Prep. “With Gonzo, his strength was [recruiting] New York City,” Hurley said. “Scott Adubato did a good job trying to navigate the waters here in the state but I think the head coach needs to steer the ship and the assistants need to put the time in but it’s going to come down to the [high school] head coaches and how much time they see the [college] head coach coming in.” JORDAN BRAND REGIONAL TEAM ANNOUNCED

Should Recruits be Released from Letters of Intent?