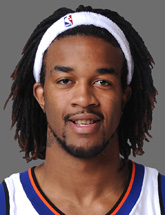 NEW YORK –Mike D’Antoni says he likes to play rookies, just not “bad rookies.” D’Antoni became defensive Sunday when told that former Knick and current Houston Rockets rookie Jordan Hill said he wasn’t given “the opportunity” to play during his tenure in New York. Hill was dealt to Houston by the Knicks during a three-team deal Feb. 18. “I don’t like to play bad rookies , I like to play good rookies,” D’Antoni said before Houston beat the Knicks, 116-112, Sunday at MSG. Hill was the No. 8 pick in last June’s NBA Draft but was constantly compared to Milwaukee rookie Brandon Jennings, who was chosen 10th and is in contention for Rookie of the Year honors. The Knicks needed a point guard more than they appeared to need another frontcourt player. “Jordan was in a position where we had Al [Harrington], Jared [Jeffries], David Lee, I tried to go with [Darko] Milicic for a while,” D’Antoni said. “He didn’t get a great chance, I agree. But at he same time we’re trying to thread the needle and make the playoffs. There was no reason to say, ‘Jared, you don’t play. Let’s play Jordan.'” He added: “It’s hard to do that. Until he has proven that he can beat the veteran out. Because you start putting rookies in and you got veterans sitting over there and the veterans [are] playing better. That’s not good for anybody.” Speaking to the Houston Chronicle earlier this week, Hill said he understood the situation but wasn’t given an “opportunity” in New York.

“D’Antoni, he relies on his veterans more than rookies,” Hill told the Chronicle. “He feels like his rookies need to learn more their first year so they could get everything down pat. I understood. I just wanted to wait patiently until my time was coming. My chance was here [in Houston], and I’m making the best of it.

“Fans there, they know what I can do. I just didn’t have the opportunity to show it.”

In the three-team deal that sent both Hill and Jeffries to Houston, the Knicks cleared salary-cap space and got Tracy McGrady’s $23 million expiring contract. They now have more than $30 million in cap space to pursue two  max-contract free agents this summer. “Under normal cirumstances you would not do that [trade a rookie],” D’Antoni said. “This is not normal. This is where we are and we’ve gone through the last two years to put us in a position where we could get to where we wanted to go. Sometimes you have to bite the bullet and do what you think is best. I think what [Knicks president] Donnie [Walsh] did was definitely the best thing to do.” As for the loss of Hill, D’Antoni didn’t sound broken up. “I do like Jordan,” he said. “I think he’ll be a nice player in the league, but that’s as far as it goes.” BENDER TO HAVE SURGERY

Jonathan Bender wore a cast on his left hand and will have surgery Monday on his fractured fourth metacarpal. He broke the finger during Friday’s win over Philadelphia. “The next thing I’m thinking about is getting this hand fixed and just rehabbing from there,” the 7-foot Bender said. He said he estimated his recovery time at “four-to-six weeks, something like that.” Bender averaged 4.7 points and 2.1 rebounds after joining the Knicks in December. Before that, he hadn’t played in three years because of chronic knee problems. Bender said he wasn’t sure what his plans are for next year and beyond. “My goal was to get back, I made it back,” he said. “After I made it back, I was satisfied. Where it goes from here, it’s up in the air.” (Photos courtesy NBA.com) Follow Adam Zagoria on Twitter

Carmelo Anthony to Knicks in 2011?