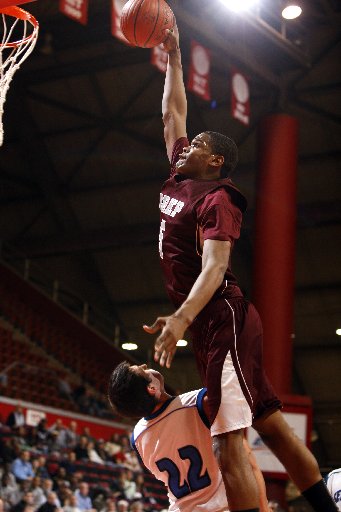 (Photos courtesy Andrew Mills / The Star-Ledger) PISCATAWAY, N.J. — Ronald Roberts, a 6-foot-8 forward from Jersey City (N.J.) St. Peter’s Prep who has committed to St. John’s, said he was uncertain of his plans now that head coach Norm Roberts’ future is in doubt. The New York Post on Thursday reported that Roberts would be let go at the end of the season. The team is NIT eligible and the school likely won’t make any official announcement until after Sunday night’s NIT selection process. “I’m just going to see what happens. I’m really not sure. I’m disappointed, but I just don’t know what to do at this point,” Roberts said after scoring 16 points as St. Peter’s beat Seton Hall Prep, 64-54, to win the New Jersey Non-Public A North title at Rutgers. Sources close to the St. Peter’s program said several Big East and ACC schools continued to call with inquiries about Roberts even though he has signed with St. John’s. Roberts would have to be let out of his Letter of Intent to transfer. Sources close to St. Peter’s Prep say there is no “out clause” in his NLI with St. John’s. Devin Ebanks had one at Indiana and ultimately landed at West Virginia after Kelvin Sampson was let go. If there is a coaching change,the administration could opt to let him leave. Norm Roberts and his staff did not appear at the game because they attended the wake for Dolores Braica, the mother of assistant coach Glenn Braica. The funeral was Friday. “I’m just focused on winning a state championship with my team right now,” Roberts said. St. Peter’s faces Camden Catholic in Saturday’s Non-Public A final.

As for the St. John’s situation, multiple outlets are reporting that the school is targeting Virginia Tech coach Seth Greenberg, a Plainview, N.Y. native and Fairleigh Dickinson graduate who has three NCAA tournament appearances on his resume. The Hokies face Miami in an ACC tournament quarterfinal Friday. Reached by phone Thursday, Greenberg said, “I can’t visit right now. I’m getting ready to prepare my team for the ACC tournament.” Greenberg, 53, has also been mentioned in connection with the Rutgers job. Rutgers athletic director Tim Pernetti has yet to make a public pronouncement on the future of head coach Fred Hill. One source said he thought Greenberg would prefer Rutgers to St. John’s if both were options. “It’s a state school. You have greater resources at a state university,” the source said. “With Jersey being the basketball state that it is, I think it would be a more attractive situation for him [at Rutgers].” That same source said Hofstra coach Tom Pecora would be more likely to land the Fordham job than the St. John’s one. “It will be hard for him to get the St. John’s job because Hofstra isn’t winning quite to the extent that they were four or five years ago,” the source said. Fordham interim coach Jared Grasso remains in the mix for the full-time job and has the support of his players. Robert Morris coach Mike Rice, a Fordham alum, has also been linked to the job. St. John’s, Rutgers and Fordham will  have to wait to interview several of these candidates. Robert Morris and Siena, coached by Fran McCaffery, are both in the NCAA tournament with automatic bids. Virginia Tech and Georgia Tech, coached by Paul Hewitt, could get at-large bids. McCaffery has been linked to the Rutgers job, and Hewitt to St. John’s. Hofstra could be headed to the NIT. ST. ANTHONY DOWNS PATERSON CATHOLIC 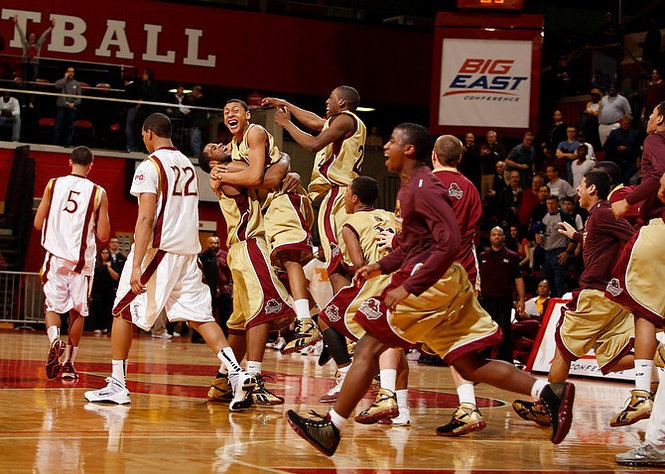 This time St. Anthony was the underdog and Paterson Catholic was the favorite. And for a second straight year, the dogs won. One year after losing to the Cougars in their own gym in the semifinals of the North Non-Public B bracket, No. 2 St. Anthony hammered No. 1 Paterson Catholic 63-49 in the North Non-Public B final at Rutgers. St. Bonaventure-bound guard Elijah Carter, born and raised for 12 years in Paterson, killed the Cougars with 28 points and 14 rebounds. Oregon State-bound forward Devon Collier added 14 points. “It feels good,” Carter said. “I grew up with them playing against them when I was younger so  it feels good to come out and get the win,” Carter said. “I wasn’t really a factor in the game last year. I worked the whole summer to improve my game and today I came and played a good game,” Carter added. The previously unbeaten Cougars (28-1) were ranked No. 3 nationally by PrepNation.com and ESPN.com. The Friars will seek their 25th state title under legendary coach Bob Hurley Saturday against Trenton Catholic. “I’m ecstatic,” Hurley said. “I don’t know if I’ve ever had a team that has made this much progress during the season.” St. Anthony has now beaten four teams this season that downed the Friars a year ago. Seton Hall-bound forward Fuquan Edwin led the Cougars with 22 points and Kyle Anderson scored 10. Junior guard Myles Mack managed just 9 points on 3-for-12 shooting. St. Anthony stifled PC with a variety of zones and defensive schemes and the Cougars never got within single-digits after trailing 27-16 at the break. “Just today, I just got to give credit where credit is due,” PC coach Damon Wright said. “They just came out and played a better basketball game than us.” PC didn’t reach its ultimate goal of winning its first Tournament of Champions title, but they did become the first Paterson team to win the prestigious City of Palms Classic. They captured their third straight Passaic County title. And they won their first 28 games of the season. The underdog won again this year. But this time the dog was St. Anthony. NOTES Among the head coaches on hand were Hill, Grasso, Pecora, Dr. John Giannini of La Salle and Jose Rebimbas of William Paterson. Seton Hall assistant Scott Adubato, Holy Cross assistant Guillermo Sanchez and Quinnipiac assistant Eric Eaton were also on hand, as was the entire Rutgers staff. For more on Bob and Dan Hurley, read the feature about their recruiting pipeline to the Big East. Follow Adam Zagoria on Twitter

Hurley Pipeline Shows off at Garden