The Houston Rockets are mulling a three-team trade that would send disgruntled superstar Tracy McGrady to the Knicks, according to Yahoo! Sports.

The Wizards would get Knicks forward Al Harrington and his expiring contract along with another player, potentially Jared Jeffries, Larry Hughes or Eddy Curry. Hughes has an expiring contract while Jeffries and Curry have deals that run through the 2010-11 season.

The Rockets would get Wizards forward Caron Butler and center Brendan Haywood.

The potential trade fits with president Donnie Walsh’s strategy of trying to land an impact player for this year while not compromising his flexibility to sign a free agent this summer. McGrady’s expiring contract is worth $23 million.

Pitino: ‘I have no interest’ in Nets job 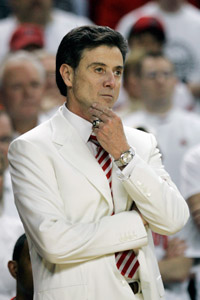 “There’s not an ounce of truth to it,” Pitino told ESPN.com’s Pat Forde.

“I have no interest, period,” Pitino said Thursday. “I’m done with coaching professional basketball. I’ve put the professional ranks behind me.”

Nets president Rod Thorn also refuted the story, telling The Star Ledger by text, “Have not had any contact with Pitino. To my knowledge, no one in our organization has, either.’’

In-season Hoops Transfers All The Rage

There is the travel cross country, often

There are four elite guards in the Class of 2010 who have yet to announce their college choices.

Brandon Knight, Doron Lamb, Josh Selby and Cory Joseph are all headed toward a spring signing bonanza and college coaches and fans are anxiously waiting to see how the dominoes fall.

The 6-foot-3, 180-pound Joseph of Findlay (Nev.) Prep is still considering the same five schools that have been on his list for some time: UConn, Villanova, Texas, Minnesota and UNLV.

“Cory still has the  same five on the list. There’s nothing new or different,” Findlay coach Michael Peck said.  “I don’t know that he’s made any movment.”

Report: Enes Kanter Opens It Up

Enes Kanter, the 6-foot-10 Turkish star who initially committed to Washington, has decided to open it up and consider other schools, according to Scout.com.

The Scout story listed Syracuse, Florida State and Kentucky as three schools Kanter was considering, but a source close to the Syracuse program said he wasn’t familiar with the recruitment.

Kanter initially chose Washington over Indiana, UNLV, USC and UCLA back in November.

He recently dropped 50 points and 20 boards in a game, according to Scout.

Knicks’ Walsh Plans to Work the Phones; Tyreke Evans Takes Over as Kings Down Knicks in OT

Instead, Walsh plans to stay home in New York and work the phones in the days leading up to the Feb. 18 trade deadline.

“Going to the All-Star Game, it’s so big now. You have a better chance of talking to GMs of other teams if you’re using the telephone,” Walsh said before Tyreke Evans scored a team-high 27 points as the Sacramento Kings beat the Knicks, 118-114, in OT at MSG. “It used to be that we were all in the same hotel and we would meet each other all the time. I can’t find them when I go to the All-Star Game.”

Walsh reiterated his long-held position that he is open to any trades that would improve the Knicks (19-31) while also allowing them to maintain salary-cap flexibility for the free agent class of 2010 that includes LeBron James, Chris Bosh and Dwyane Wade. That means he will trade expiring contracts for expiring contracts.