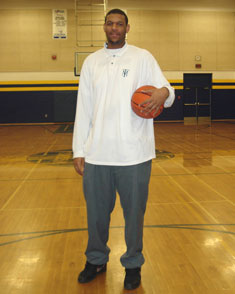 Maurice Walker is one of the most sought after big men in the Class of 2010. The 6-foot-10, 280-pound Toronto native is currently playing at Wolfeboro  (N.H.) Brewster Academy and plans to cut his list with his father later this week. “We plan on sitting down this week to hash out our top five and see if we can schedule our visits for the spring and get that portion of things wrapped up,” Craig Walker said Monday by phone. Walker is ranked No. 12 among centers in the Class of 2010 and No. 118 overall by Rivals. Craig Walker said the current list for his son includes Seton Hall, Georgetown, Pittsburgh, Marquette and St. John’s. He added that South Florida, Oregon State and Memphis have also expressed interest. “My thoughts are that Maurice  will probably stay in the East somewhere,” Craig said. “As parents, we’d rather he play in the East side of the country in the Big East. We know we can hop on a plane and be there in an hour.” Craig said Seton Hall assistant coach Scott Adubato had come to Brewster three or four times. “The guys from Seton Hall have shown a lot of interest,” he said. ” “Seton Hall, the one thing that they’ve made very plain to us is that they are very interested.” Pitt and Georgetown also appear to be high on the list. “We’ve always been interested in Pitt. They’re playing really good basketball right now,” Craig said. “Georgetown, we’ve been interested as well. They’ve show some interest. The coaches from Georgetown have gone up a couple times,” he added. He added that Marquette and St. John’s “have shown interest” and that virtually every school in the Big East except for Louisville and Syracuse has made contact. Craig also mentioned that Oregon State head coach Craig Robinson had reached out by phone. “They recruited him a year ago. They have kind of thrown their hat back in the mix,” Craig said. Maurice plays alongside five Division I commits, including C.J. Fair (Syracuse), Austin Carroll (Rutgers) and Will Barton (Memphis). Craig said Barton had also talked to Maurice about having him join him at Memphis. “Will is more than happy to pass him on to Memphis,” Craig said. Brewster begins the NEPSAC playoffs March 3 and Craig said a few visits could be coming up soon. “He’s got his school playoffs and national tournament coming up,” Craig said. “We’re gonna go through that and maybe in the next week or two see if we can visit some schools.” (Photo courtesy Torontoobserver.ca) Follow Adam Zagoria on Twitter.