Michael Gilchrist, the consensus No. 1 player in the Class of 2011, is making an unofficial visit to Villanova this weekend. The 6-foot-7 Somerdale, N.J., native, who plays for Elizabeth (N.J.) St. Patrick, also visited Villanova’s campus last year. “What we are hoping to get out of this visit is more of the academic side,” Cindy Richardson, Gilchrist’s mother, told Keith Pompey of the Philly Inquirer earlier this week. “We already know what Michael is going to do for that program. . . . So we want to know what Villanova is going to do for Michael. “We are going to find out how they are going to support Michael from a basketball standpoint and academic standpoint.” Gilchrist has already taken unofficials in recent weeks to Rutgers and Michigan. His mother told the Inquirer that he wants to take additional visits to Kentucky, UConn, Oregon, and Louisiana State before the season starts. Gilchrist is slated to visit Kentucky for Big Blue Madness Oct. 16, but no other dates have been made public. Many observers expect Gilchrist to ultimately sign with Kentucky or Villanova, but he says he’s open. “I’m just having fun with my selection of colleges,” he told the Inquirer. “But it’s early. I’m just starting my process.” ARMY HIRES CORNELL ASSISTANT

Army named Zach Spiker as its new coach on Saturday. An assistant under Cornell head coach Steve Donahue the past five years, Spiker helped the Big Red to upper-division finishes in the Ivy League during each of his five seasons in Ithaca, N.Y. He was instrumental in helping Cornell’s recruiting efforts the last five years, culminating in the Big Red winning consecutive Ivy League titles the past two seasons. It marked the first back-to-back league titles for Cornell in school history and the first time a team other than Pennsylvania or Princeton copped consecutive Ivy League championships. Jeff Goodman of FoxSports.com reported that Spiker was selected over Arizona State associate head coach Dedrique Taylor and St. John’s assistant Fred Quartlebaum. “We couldn’t be more excited to name Zach Spiker as the head coach of our men’s basketball program,” U.S. Military Academy Superintendent Lt. Gen. Buster Hagenbeck said. “Zach impressed us with his high-energy level, intimate knowledge of our program and well-conceived plan to deliver a championship to the Army program.” “We conducted a national search and spoke to a tremendous pool of candidates,” Army AD Kevin Anderson stated. “Throughout the process, one individual clearly rose to the top.” “Zach is highly regarded by some of the most well-respected coaches in the country. He is widely recognized as one of the true young talents in the coaching profession and someone we feel is ready to lead our program to a Patriot League championship,” Anderson added. NEW YORK’S BIGGEST SECRET The biggest secret in New York City high school hoops is a young man named Amadou Sidibe. The 6-7 Sidibe is a sophomore at Cardinal Hayes in The Bronx and already holds a scholarship offer from Fordham. Sidibe was on Fordham’s campus Saturday for an unofficial visit along with teammate Fidel Yacoubou, a Wings transfer and the younger brother of Long Island Lutheran guard Achraf Yacoubou. “He’s an interesting kid. Nobody’s heard of him yet. He never played  AAU. He barely played any organized basketball,” said Hayes assistant coach Justin Simon.

“[Fordham assistant] Jared Grasso came into the gym Wednesday and offered him within like five minutes.” Simon said Sidibe has a tremendous upside. “He’s going to be our center this year,” Simon said. “He’s a little raw. He has great touch. Long arms, blocks everything, great rebounder.” Nobody knows area talent better than Grasso (pictured above left), who has established a pipeline from Jersey powers St. Anthony and Paterson Catholic to Fordham. But Yale coach James Jones is also high on Sidibe. “Jared was the first guy to offer him,” Simon said. “But I brought him up to the Yale Elite camp and Coach Jones from Yale loved him.” MURPHY GETTING LOOKS 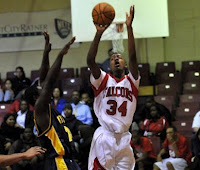 Rod Odom Down to 4 Schools