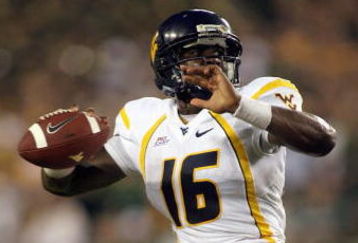 The Big East announced its weekly football award winners for this week.

Brown had 407 yards of total offense to key West Virginia’s 35-20 win against East Carolina. He completed 24 of 31 passes for career highs of 334 yards and four touchdowns and added 73 rushing yards on 10 attempts. Brown had a hand in 80 percent of West Virginia’s 509 total yards against the Pirates and became just the fourth Mountaineer player in history to register 400 yards of offense in a game.

Gunn, a rare sixth-year senior, registered three sacks and had 11 tackles in Pittsburgh’s 54-27 win at Buffalo. His three sacks resulted in a combined loss of 25 yards and his third sack denied a Buffalo red zone scoring chance in the fourth quarter. Gunn, who suffered a broken neck in last year’s season opener and missed the remainder of the 2008 season, has five sacks through two games.

Gilyard had a 53-yard punt return for a touchdown as part his four-TD effort in Cincinnati’s 70-3 win against Southeast Missouri State, becoming the first Bearcat player to return a punt for a score in 12 years. Gilyard, who had 197 all-purpose yards against the Redhawks, became the first FBS player to score on a punt return, run and catch in the same game since UCLA’s Maurice Drew (now Maurice Jones-Drew) did it against California Oct. 8, 2005.

Jourdan Brooks, RB, Rutgers — Ran for 124 yards and three touchdowns in a 45-7 win against Howard.

Brandon Hogan, DB, West Virginia — Had a game- and career-high 11 tackles with two pass breakups in a 35-20 win against East Carolina.

Cincy Seizes Control of Big East; Pike on the Rise