'When a ball dreams, it dreams it's a Frisbee' | Zagsblog
Follow @adamzagoria

'When a ball dreams, it dreams it's a Frisbee'

For 20 years I have played competitive Ultimate Frisbee, and for 20 years people have asked me if I play with dogs or on the beach. The answers continue to be, “No” and “Sometimes.” There’s an old expression, “When a ball dreams, it dreams it’s a Frisbee.” Why? Because the thrower can make the disc arc, bend and curve in ways he or she couldn’t throw a football, baseball or basketball. Just check out the tremendous trailer above from UltiVillage.com. Why am I  bringing this up today? 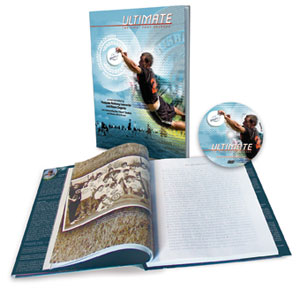 In part because the New York Times had a very well done story in today’s Style section about the growth of Ultimate, specifically women’s Ultimate. It also features a little sidebar about where to play here in New York City that mentions the book I co-wrote on the history of Ultimate: ‘Ultimate: The First Four Decades.’ Did you happen to know that one of the inventors of Ultimate was Joel Silver, who went on to produce the ‘Die Hard,’ ‘Lethal Weapon’ and “Matrix’ movies? Did you know that the first college Ultimate game between Rutgers and Princeton was played in 1972, 103 years to the day after the first collegiate football game between the two schools (1869) ? The game was played in a parking lot at Rutgers before more than 1,000 fans and former Yankees pitcher Jim Bouton interviewed the winners on WABC-TV. After that game, the players, including the 6-foot-8 Dan “Stork” Roddick, Rutgers’ star receiver, were so fired up by the stir their new sport had created, they thought Ultimate might one day be featured on ‘Monday Night Ultimate.’ Today Ultimate is played in more than 40 countries worldwide and there are National and World championships. Once the exclusive province of stoners and hippies, Ultimate is increasingly played by crossover athletes from other sports (soccer, lacrosse) who discover the sport in high school or college and train year-round to be in top condition for a run to Nationals. At the summer league level, things are a bit more relaxed. New York  features the Westchester Summer League (wudi.org) that runs from June through August at SUNY Purchase. This league features a mix of players,  everyone from elite club players to college players to  new people trying to learn the game. After 20 years, my friends and I still answer questions about playing Frisbee with dogs or on the beach. And after 20 years, I’m convinced we’ll never see ‘Monday Night Ultimate,” but it’s nice to see our little game get some love every once in a while.