DETROIT – The Naismith Hall of Fame has once again decided in its infinite wisdom to keep legendary St. Anthony coach Bob Hurley outside of its hallowed walls. The official word won’t come until Monday, but it’s a fact that Hurley won’t be among those joining Michael Jordan, David Robinson, John Stockton and Rutgers women’s coach C. Vivian Stringer in this year’s class. This is the second straight year Hurley was nominated and the second year he’s been shut out. “It’s a disgrace,” said Adrian Wojnarowski, the author of “The Miracle of St. Anthony,” the tremendous bio of Coach Hurley’s undefeated 2004 team. “It’s a disgrace he’s being made to wait this long. People with far less credentials and far less of an impact on the game off basketball are in the Hall of Fame and continue to get in the Hall of Fame. “And it’s an insult to high school basketball. There are two coaches in high school basketball, Morgan Wootten and Bob Hurley, and I can’t imagine what else in the world he needs to do to validate himself.” Wooten remains the only person to coach exclusively high school basketball who is in the Hall. Reached by phone Friday morning, Hurley said he couldn’t comment on the situation because the official announcement won’t come until Monday. But that doesn’t stop others from commenting for him. “If he’s not in the Hall of Fame, it’s a Hall of Shame,” longtime New York-based recruiting analyst Tom Konchalski once told me. 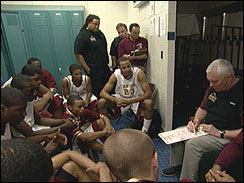 Hurley, 61, has led St. Anthony to 23 state championships, 10 New Jersey Tournament of Champions titles and three national championships across a 37-year coaching career. A year ago, his team went a perfect 32-0, won the mythical national champion and sent six players to Division 1. He has more than 950 career victories and should get to 1,000 sometime in the next couple of years. He has impacted the lives of hundreds of young men, helping to keep them off the dangerous streets of Jersey City and on the hard, difficult road to college. “Yes, of course he deserves to be in,” said Derrick Mercer Sr., whose son, Derrick Jr., led American University into the NCAA Tournament, where it nearly upset Villanova. “I think it’s an injustice that he’s not in already. He should have been in a couple of years ago. I’m sad. I’m disappointed. He should’ve been in. He really should’ve been in a couple of years ago. “He means so much to me.  I went to the open gym yesterday just to thank him for all the things that he did. I wanted to do it to his face. He’s a good man. A lot of people don’t think so. He’s in it for the kids. He’s a hard worker, works hard for the kids.” Wojnarowski said it hurts Hurley that he doesn’t have a sports information director or “publicity machine” working overtime to promote his cause, like some people. “All he has are his merits and his merits speak for themselves and that’s the frustrating part of this,” he said. “He doesn’t have a television network to push him and I just think that his accomplishments speak for themselves and I can’t understand why there’s somebody who can justify why he’s not in.” Hurley is not about to toot his own horn, but he must be disappointed. Back in January, when his team played at the Hall of Fame, he told me it would be an honor to be inducted. “It would be the pinnacle of my coaching career if that happened,” he said.”I’m loving going to practice. Coaching games has nothing to do with any individual aspirations anybody has. We just love to do this.” Dan Hurley, Bob’s younger son and the coach of St. Benedict’s Prep in Newark, said he believed his father deserves to be in the Hall. “I would think so. He’s an iconic figure,” Dan said then. “He’s a coach’s coach. If anyone is deserving, it’s him. The time that he’s spent coaching kids and helping kids, I would think that the Hall of Fame would be proud to induct him “He’s given his life not just to a coaching career, but to coaching. A lot of guys give their life to a coaching career where they can make the most money and get the best most high-paying job, as opposed to a coaching career. I would think that would be worth a couple of votes.” Hurley has had an impact on generations of coaches, from his own son to Kevin Boyle of St. Patrick to college coaches like Jared Grasso of Fordham. “I watch him as much as I watch the game,” Grasso said in Springfield in January. “He’s the best there is.” Apparently the officials at the Hall didn’t think so. Shame, shame on them. Let’s hope he doesn’t have to wait as long as Jim Rice. ***** CBS Sunday Morning is airing a feature on Hurley this Sunday at 9 a.m. The feature is slated to include an exclusive clip from the documentary, “The Street Stops Here.” Read more here. (Photos courtesy Richard Orr, CBS News)