The Allman Brothers Band wrapped up their momentous 40th anniversary 15-show run Saturday night at the Beacon Theater. I wasn’t there because I was in Boston watching Scottie Reynolds and Villanova win an instant classic thriller over Big East rival Pitt, 78-76, that propelled the Wildcats to their first Final Four since 1985. 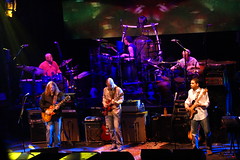 But Phil Lesh and Bobby Weir were the special guests on the last night of the run and the setlist included “Sugaree,” “I Know You Rider” and “Franklin’s Tower.” There are some complaints on the Allmans messageboard that the second set of the final night was dominated by Phil and Bobby and that Gregg Allman sat on his hands with nothing to do. 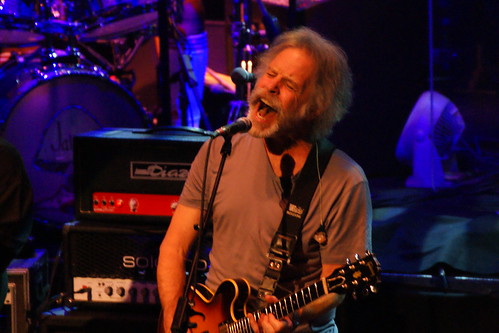 The Dead had last performed in 2004. They have regrouped in various combinations to support Obama since. The harshest critics say Warren Haynes, the guitarist for both The Allmans and The Dead, used the performance as a segue to the upcoming Dead shows in and around New York. The Dead will appear on ABC’s “The View” on Monday morning and will then play three shows in New York City on Monday. Only folks who registered at dead.net got access to tickets.

I plan on seeing The Dead at MSG on April 25, but I’m sad to see The Allmans go. I was able to see three shows on nights when there was no basketball and the special guests I saw included Taj Mahal, Levon Helm, Billy Gibbons and Sheryl Crow. The Taj Mahal set the first night still strikes me as among the best I’ve ever seen the Allmans do at The Beacon. Dude just ripped out a version of “Leavin Trunk” that was unbelievable and is at the top of this post. I was in the second row for this and it was inspired. Then Levon joined in on a version of “The Weight” that was fabulous, with Gregg Allman, Levon and Taj Mahal each doing a verse. See it here.

I missed out on the Eric Clapton shows due to my near-fake ticket incident which I wrote about previously, but everyone says those shows were great. Last Tuesday there was a classic moment when ZZ Top’s Gibbons came out and all the boys in the Allmans wore fake beards to honor his legendary facial hair. (Check the classic photo.)

Coming up Short on Clapton Tickets

Anvil! The Story of Anvil