Gonzo Says SHU Will be in Top Tier of Big East; Roy Williams on Dexter Strickland 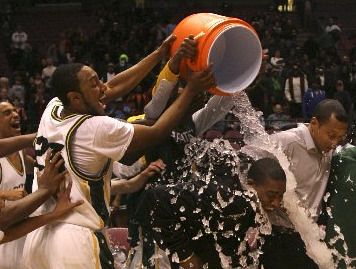 Seton Hall coach Bobby Gonzalez says the Pirates will be in the top “six or eight” of the Big East next season with the additions of three transfers — Keon Lawrence, Herb Pope and Jeff Robinson — as well as big man Melvyn Oliver. “I am very excited,” Gonzalez told the Star-Ledger at last night’s Tournament of Champions final, won by St. Patrick over Newark Science 73-57. “We finished strong this year and won seven of our last 12. I think we will be in the top six or eight teams in the Big East and a factor for the NCAA tournament. I’m excited, the sky’s the limit.” Gonzalez, Rutgers head coach Fred Hill and Iona assistant Shaheen Holloway attended the game in part to recruit St. Patrick’s star underclassmen, junior guard Kyrie Irving and sophomore wing Michael Gilchrist. They did not disappoint. Irving tallied 26 points, Gilchrist, who shook off an ankle injury to return recently, added 16 points and 15 boards and North Carolina-bound guard Dexter Strickland scored 14 points. George Mason-bound forward Paris Bennett scored nine points despite playing with a broken nose. It was the fifth T of C title for coach Kevin Boyle and the Celtics and the third in the last four years. North Carolina coach Roy Williams was also there to watch Strickland. “The first think we look for in a recruit is if he’s going to be a great teammate, and Dexter is right there,” said Williams, whose team faces Gonzaga on Friday night in the NCAA Sweet 16 in Memphis, Tenn. “He’s a tremendous prospect. I noticed he turned the ball over a couple times in the first half, but he shares the ball and he’s a great shooter.'” (Photo courtesy Star-Ledger)