Lance Stephenson took an official visit to Maryland Saturday night for the team’s 73-68 victory over  Miami.

The 6-foot-5 Stephenson, listed as the No. 1 player in the Class of 2009 by the Hoop Scoop, sat front row and was greeted with enthusiastic cheers from fans who urged him to come to Maryland, according to reports.

Stephenson has listed St. John’s, Kansas, Memphis and USC as his top options, but Memphis is not actively recruiting him.

“I’m worrying about these schools right now and I’m still looking at it,” Stephenson, averaging 32 points and 12 rebounds, said recently.

Below are several of the All-America teams.

Here are some interesting notes: 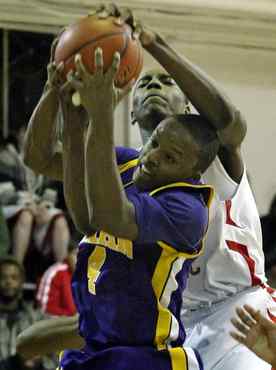 Villanova-bound guard Maalik Wayns of Philly Roman Catholic could miss as many as five weeks after twisting his knee in a game Tuesday. He underwent an MRI and was awaiting results.

He will miss tonight’s game against Chester in the Primetime Shootout at Villanova.

“I was told that I can miss anywhere from two [to] five weeks,” Wayns told the Philly Inquirer. “It’s real disappointing. I was looking forward to the big game with Chester. Hopefully, I will be able to play in the [Catholic League] playoffs, championship and state playoffs.”

Nadal Prevails in Thriller; Federer Up Next

If you missed the Rafael Nadal-Fernando Verdasco semifinal in the Australian Open, you missed one of the greatest matches in the history of tennis. Try to catch the replay (or at least the end of it) later today on ESPN.

I watched pretty much from start to finish, beginning at 3:30 a.m. and finishing up shortly after 9 a.m. Nadal finally won the five-set epic when his fellow left-handed Spaniard double-faulted on the third match point at 4-5 of the fifth set.

NEWARK – With 45 seconds remaining in a nip-and-tuck game between bitter in-state rivals, Jeremy Hazell drove into the paint and elevated between two taller defenders, only to let loose a soft floater that fell effortlessly through the net and extended his team’s lead to six points.

Hazell, a 6-foot-5 sophomore who more and more looks like he could have a future in the NBA, overcame a slow start and ultimately proved too dominant a force for Rutgers to overcome.

And below are a few choice quotes from the parties involved…

No Love Lost Between Hill, Gonzo

PISCATAWAY, N.J. -- Watch the handshake. If you