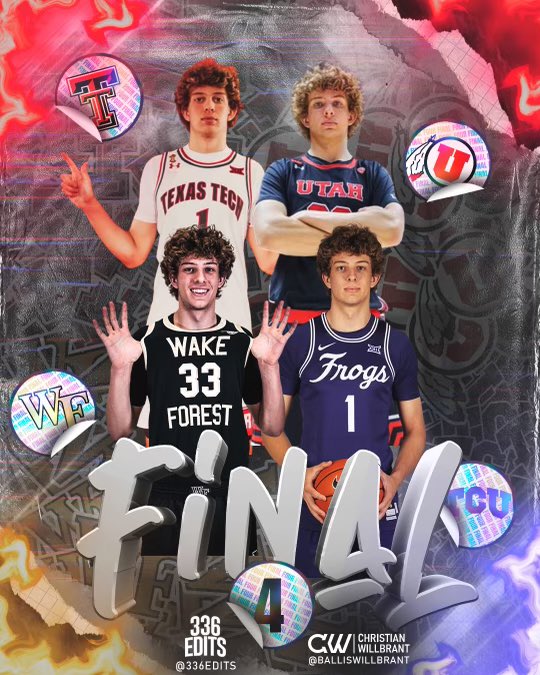 By JACOB POLACHECK Class of 2022 four-star forward Zach Keller is officially down to a final four of TCU, Wake Forest, Texas Tech and Utah with a decision upcoming. Keller, who is looking to commit in the next week to two weeks, says each of his four schools fell into the general criteria he was looking for in a school. “They went above the other schools offered,” he said Thursday evening. “They all have me as a stretch-four in their system. I get along with the coaching staffs really well, along with their players. All the visits I went on went pretty well. That’s the reason they’re up there for me.” The 6-foot-9, 220-pound power forward from ThunderRidge (CO) and the Utah Prospects AAU Program, has taken official visits to all four schools. He broke down his options: TCU: “They were my very first visit. Dallas-Fort Worth is a pretty good area. The campus is small. Size doesn’t really matter to me. It’s a really good campus, really good facilities. The coaching staff and I got along pretty well. They want me to be a four in their system like all the other schools. Overall, their style of play, I liked as well. They have a great education too.” Wake Forest: That’s also a small school, which is not bad at all. They’re in the ACC which I also kind of liked. They’re losing a couple bigs so I’d have a good chance to play. I would also be a stretch-four in their program. They have elite academics. I love their coaching staff and their players. A lot of them reach out to me constantly. Winston-Salem is a really good overall area.” Texas Tech: “That was the first big visit I went on. They have a very die hard fan base I found out. Also with them, I like the coaching staff, the facilities were great. I would be a stretch-four in their system. It overall fits my criteria. I’ve met people that have gone there in the past and they’ve said it’s a really great school.” Utah: “I’ve been there a bunch of times because I play for the Utah Prospects. I know the area well. I know where it’s located. I know the coaching staff really well. I got along with the players really well. They have great academics. Campus is really good. The facilities, training room and facilities are top of the line. Like all the other schools, I would be a stretch-four for their system.” Keller says he is still looking to cut his list to two schools before making his decision, but will not make the two schools public. “I’m not going to announce it or anything,” he said. “It just makes it easier for me personally if it’s between two schools.” With all four schools hitting his main criteria, Keller says he’s looking at fit and play style specifically with each school. “Do they help me with my goals? Are they going to help me as a player?” he said. “And then it’s going to come down to the gut feeling of going to this place.” Ranked by 247Sports.com as the No. 10 power forward and the No. 75 overall prospect in the class of 2022, Keller will be able to play the four and stretch the floor. “I’m a player who gives it his all every night,” he said. “I never take plays off. I’m a great teammate. I will always try to be a nice guy off the court. If anybody needs anything, I like to help out. Overall, I’m just a player who gives it his all, loves to win and will do anything to win.” Follow Jacob Polacheck on Twitter Follow Adam Zagoria on Twitter Follow ZAGSBLOGHoops on Instagram And Like ZAGS on Facebook