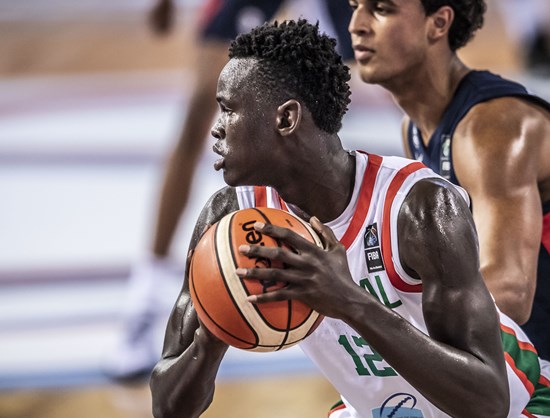 By JACOB POLACHECK Just over seven months since moving to the United States from Senegal, junior forward Mouhamed Lamine Mbaye has started to capture the attention of high-major schools. Mbaye, the 6-foot-8, 215-pound forward from Aspire Academy (KY), picked up his first offer from Louisville on Friday. “I’ve already been to a Louisville for a visit,” Mbaye told ZAGSBLOG Monday. “That was fun. The city, they like basketball and they support the team. They play hard, so I like it.” Lamine took an unofficial to Louisville for their game against Virginia Tech on Senior Night (March 1). “I like how they play hard,” he said. “They have a lot of support and I think I can get better there.” Mbaye has also been receiving interest from schools such as Cincinnati, Rutgers and Iona. Mbaye, a native of Dakar, Senegal, has played on the nation’s U-18 and U-19 squads before making the move to the United States in October of 2019. “The transition was a little bit hard, but I’m getting better,” Mbaye said. “When I first came to the United States, I didn’t speak english, but now my english is getting better.” Mbaye has been playing basketball for four years, but described his time representing Team Africa at the NBA Basketball Without Borders Camp during the 2019 NBA All Star Weekend as an eye opener for him. “It was first time I was playing against big time players like Josh Christopher and Jalen Green,” he said. “I was playing against them and I knew when I came to the U.S. I would do good things.” During the coronavirus pandemic, Mbaye is staying with his brother in Denver. “I’ve been doing workouts with my brother here,” he said. “I’m working on my dribble and my shot. We have an outdoor gym here to practice so it’s been good.” Mbaye was originally slated to play for the Under Armour program SI Select this AAU season before events were canceled. “He’s a grown man playing with little kids,” SI Select Program Co-Director Riley Swinford said. “His best basketball is ahead of him. He’s still learning the American game. His potential is so high. That’s one of the reasons why Louisville offered.” This season at Aspire Academy, Mbaye averaged 11 points and 7.0 rebounds in 16 games played. “Mo is unlike any player I’ve ever had,” SI Select Program Co-Director Sam Swinford said. “He’s so skilled, so long, so athletic, but what sets him apart is his motor and his work ethic. Pair those intangibles with his elite character and he’s a no brainer for any high-major school.” Photo: FIBA Follow Jacob on Twitter Follow Adam Zagoria on Twitter And Like ZAGS on Facebook