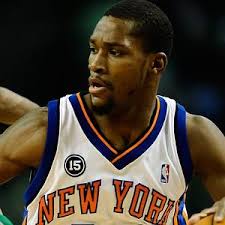 When the Knicks’ season began more than two months ago, Douglas was the team’s starting point guard and Jeremy Lin was firmly entrenched at the end of the bench.

And while Linsanity has been examined from just about every angle imaginable, this story has really not been covered. NEW YORK — The Cavaliers-Knicks game Wednesday night wasn’t billed as the “St. Benedict’s Prep Alumni Game,” but it easily could have been.

Between them, the four players accounted for 44 points and 13 rebounds in the Knicks’ 120-103 victory. Samuels said all the Jersey players have the “same little swag…a little approach to things.”

NEW YORK –– Entering his first game against the team that amnestied him last December, Baron Davis insisted it was all about basketball and that he held no grudges against the Cleveland Cavaliers.

But it must’ve felt sweet for Davis to contribute significantly to the Knicks’ 120-103 come-from-behind victory over Kyrie Irving and the Cavs.

In his best game yet as a Knick, Davis had eight assists, four points and no turnovers as the second unit fueled a 71-42 second-half rout that turned the game around.

“For me, my whole motivation is trying to get back,” Davis told reporters.