FSU’s Singleton Works Out for Knicks

GREENBURGH, N.Y. — Whether or not LeBron James and the Miami Heat win the NBA championship, they figure to be a major stumbling block for the Knicks over the next several years in the Eastern Conference.

With that in mind, the organization is looking at defensive-minded wings who can help contain stars like James and Dwyane Wade.

One such wing, 6-foot-8 1/2, 230-pound Chris Singleton of Florida State worked out Thursday for the Knicks, along with point guards Iman Shumpert of Georgia Tech and Charles Jenkins of Hofstra. 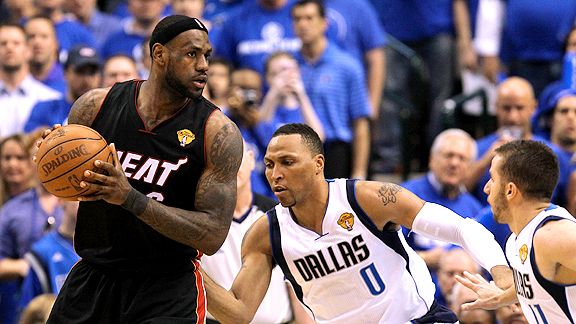 LeBron James may play for the Heat, but he’s also facing the heat on all sides after another dismal fourth-quarter performance.

Yet his high school coach is sticking up for him.

If you go to the Rumble in the Bronx this weekend expecting to see 6-foot-8 Kyle Anderson run the point for the Playaz Basketball Club, you may be disappointed.

That’s because Anderson, one of the most talented and intriguing players in the Class of 2012, will play on the wing for the rest of the summer.

“We are going to change him to the wing for this weekend’s tournament and the live period,” Kyle Anderson Sr. said. “We wanted him to play the point in EYBL to show he is a point. We need to play him at the wing to create more plays and mismatches which will be more productive for the team.”

It’s been a good week for the UConn Huskies.

Two days after landing 2011 small forward DeAndre Daniels, the Huskies picked up a verbal commitment Thursday from 6-foot-5  Omar Calhoun Jr. of Christ the King, the No. 8 shooting guard in the Class of 2012.

“Yes, I committed to the University of Connecticut,” he said by text. “After spending quality time with Coach [Jim] Calhoun and the rest of the coaching staff, Coach [Kevin] Ollie and Coach [Glen] Miller and touring the campus my family and I felt UConn is the perfect place for me to continue my higher education academically as well as athletically.

The 6-foot-5, 185-pound Christ the King junior took an unofficial to campus Thursday with his father and enjoyed it.

“We were able to spend some quality time with Coach [Jim] Calhoun and the rest of the coaching staff,” Omar Sr. said. “We met some of the players and they were real cool. We toured the campus. Overall it was a great visit. It’s definitely a place we will come back to.”

Kareem Albritton, Jenkins’ older brother and the father of Kemoni Albritton, was shot and killed in Brooklyn in 2001. Ever since, Jenkins’ has helped raise the girl.

He knows that if he makes the NBA she won’t have to worry about money for food anytime soon.

“Every time I step on the floor I always have a bad thought in my head of her not eating,” Jenkins, the former Hofstra star, recalled Thursday after working out for the Knicks.