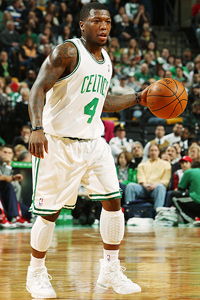 The former Knick got Celtics coach Doc Rivers to incorporate two of his old New York plays  into the Celtics’ playbook and the results paid off. Robinson scored 20 points in Tuesday’s 105-100 win at Detroit.

“I heard he played well and it’s good for him. It’s a real good opportunity for him, so that’s good. I’m sure Doc’s got thousands of plays, but maybe [Robinson’s] comfortable with that,” D’Antoni said before the Knicks faced Detroit Wednesday at MSG.

Rivers told Robinson he was fine with incorporating the plays as long as Nate taught his new teammates.

Arizona has emerged as the early leader for Kadeem Jack, a 6-foot-9 senior forward from Manhattan Rice.

“Yeah, pretty much. I don’t see why not,” said Damian Leslie, Jack’s mentor.

“Aside from it being in a nice environment and having a winning tradition, he visited the school so you would have to say that’s what it is.”

Jack visited Arizona in January and then came home and led Rice to the SNY Invitational title at LIU-Brooklyn.

Wagner athletic director Walt Hameline said the school is in the process of taking resumes for the men’s basketball coaching vacancy created by Monday’s firing of Mike Deane and that he hoped to have a decision made “toward the end of the month.”

“We’re taking resumes,” Hameline said Wednesday morning by phone. “Obviously, we’ll see who’s applying and then there will be a committee put together on campus. Hopefully by the end of the month we’ll get people on campus.”

Asked when he hoped to make a decision, Hameline said, “I’m looking somewhere toward the end of the month.”

As first reported on my Twitter, Jamir Hanner, a 6-foot-8, 200-pound forward from Newark (N.J.) Nia Prep, has verbally committed to Seton Hall.

Hanner and McCrory have yet to sign, but can do so in April.

“I just committed two hours ago. I just like the atmosphere of the campus. I like the coaching staff as well as their style of play,” Hanner said by text.

Whittenburg to Replace Deane at Wagner; Calloway to Return at Monmouth

In seven seasons as head coach of the Seahawks, Deane compiled an overall record of 94-114. This past season, the Green & White finished 3-15 in the Northeast Conference. In 26 years as a head coach, Deane has amassed a record of 437-332.

“We thank Mike for his contributions as head basketball coach at Wagner,” Wagner AD Walt Hameline said. “I admire him greatly as a human being and for the knowledge, competitiveness and passion he brought to the program. At the end of the day, I decided it was time make a change and go in a different direction.” NEWARK, N.J. — The season is officially over for the Elizabeth (N.J) St. Patrick basketball team.

“The court finds that their [constitutional rights] were not [violated] and plaintiff’s application for injunctive relief is denied,” Judge Cavanaugh said shortly after 11 a.m. in Court Room 4 of the Martin Luther King Jr. Federal Building and Courthouse.

The defending New Jersey Tournament of Champions winner, St. Patrick (26-3) was hoping to get an injunction in order to play in the North Non-Public B bracket, beginning Tuesday.

“The kids were looking forward to having a chance to compete in the state tournament and they’ll be very disappointed but these kids have accomplished a lot. They’re very proud of themselves, they’re great friends and they’ll move on,” a disappointed St. Patrick coach Kevin Boyle said.