The 6-foot-9 Echenique has been given a conditional release that includes a limited number of schools.

“Gregory has been a valuable member of our program,”  Hill said in a statement. “We are appreciative of his contributions at Rutgers and wish him the best in his future endeavors.”

A native of Guatire, Venezuela who starred at St. Benedict’s Prep in Newark, Echenique started all seven games in which he played this season. He averaged 12.6 points and 7.7 rebounds-per-game, while shooting 61 percent (28-46) from the field with 16 blocks.

Echenique is the fourth member of the Rutgers program to leave in the last year. Corey Chandler was dismissed from the team in August, and Christian Morris (December 2008) and Earl Pettis (May 2009) both transferred. 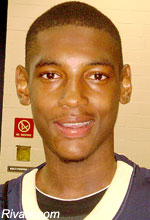 After months of weighing his options, Oak Hill (Va.) Academy forward Roscoe Smith has made the call.

“I called [assistant] Coach [Pat] Sellers because Coach [Jim] Calhoun was on the airplane,” Smith, the No. 6 small forward in the Class of 2010 according to Rivals, said by phone. “I left him a text message.”

Smith said he picked the Huskies because of their style of play and because of Calhoun’s history of producing talented pros.

Seton Hall has already faced several of the top players in this year’s Big East.

Wesley Johnson of Syracuse, Da’Sean Butler and Devin Ebanks of West Virginia and Jerome Dyson and Stanley Robinson of UConn have all played — and beaten — the Pirates this season.

Now here comes Cincinnati and Lance Stephenson, the Big East Preseason Rookie of the Year who is averaging a team-best 12.5 points to go with 4.8 rebounds.

“With a guy like Lance, he just doesn’t look like a freshman. He’s like a man out there. I think he’s just a difference-maker for them and he gives them another offensive weapon that they haven’t had to go with [Yancy] Gates and Deonta Vaughn,” said Pirates coach Bobby Gonzalez, whose team has dropped four straight and five of six.

Smith, who was averaging 11.7 points, 4.7 rebounds and 26.8 minutes, was among four players arrested on New Year’s Day for drugs and weapons charges.

The other three players involved will remain indefinitely suspended.

No. 16 Tennessee faces No. 1 Kansas Sunday at Thompson-Boling Arena without all four players.

“When we have a situation like this involving our student-athletes, we want to make sure we get as much information as possible before making difficult decisions,” UT head coach Bruce Pearl said in a statement. “From the beginning, the student-athletes involved have been accountable, remorseful and cooperative with me. While we are not allowed to discuss specifics, we felt we had enough information at this time to dismiss Tyler Smith from the team. Melvin Goins, Cameron Tatum and Brian Williams will remain indefinitely suspended.

Here’s a video interview from ABC-WTVQ with Raleigh (N.C.) Word of God forward C.J. Leslie, who will be participating this weekend in the Dunkin Donuts Shootout National Classic at Lexington (Ky.) Catholic.

The 6-foot-9 Leslie is a friend and former teammate of current Kentucky freshman sensation John Wall and sure sounds like he might follow Wall to Bluegrass country.

“I think it’s a high interest on both parts,” Leslie said. “I’m definitely feeling Kentucky, and Kentucky is felling me. They’ve got some of the best fans around.”

Walsh Knows Which Knicks Have Guns

NEW YORK — In the wake of the Gilbert Arenas incident, Knicks president Donnie Walsh said the franchise knows which of its players have guns and that they have been instructed not to bring them to work.

“The guy who addresses them every day is John Donahue,” Walsh, referring to the Knicks Director of Security, said before New York beat the Bobcats, 97-93,  Thursday night. “I had him talk to the team and to let them know, ‘Hey, you can’t bring a gun into the facility and you’re  in New York. You can’t carry a gun.'”

Asked directly if he knew which Knicks have guns, Walsh said “We know, we know. I don’t study it every day so I can’t tell you that. That’s why I have faith in John because he knows….In New York I guess they leave them home.”

While New York City has strict anti-gun laws, as Plaxico Burress found out the hard way, Walsh said he’s lived in various parts of the country where guns are allowed.