NEW YORK – The Louisville players came bounding off the bench and began jumping up and down and chest-bumping one another all over the Madison Square Garden floor.

With their 76-66 victory over an inspired but worn-out Syracuse team in the Big East Championship game, the top-seeded Cardinals scored the program’s first Big East title.

And they finally gave Rick Pitino the one college title that has eluded him.

NEW YORK – Eric Devendorf may have done his best Gerry McNamara impersonation over the last four days at the Big East Championship, but Syracuse isn’t headed for a repeat of 2006.

The Orange won the Big East tournament title in 2005 and ’06, but proceeded to get upset in the first round of the NCAA Tournament by Vermont and Texas A&M, respetively.

“I think the two times we won we really were riding a couple guys, especially the last time,”  Boeheim said after top-seeded Louisville beat No. 6 Syracuse 76-66 to win the Big East title. “Gerry had nothing left the next week [in ’06]. That’s not the case this time. We’ll be fine and ready to go in a couple days; Jonny [Flynn] and all these guys will be at full strength by Tuesday.  We could play Tuesday right now if we had to.”

“I’m visiting South Florida on the 27th [of March] for the weekend,” Famous said.

Famous visited Seton Hall last fall and recently made his first official visit of the spring to Missouri, where he stayed with junior 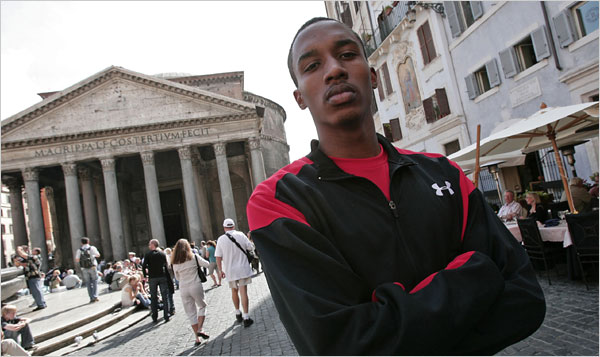 In an interview with Bryant Gumbel that will be broadcast Tuesday night on HBO’s “Real Sports,” Brandon Jennings says playing ball in Italy is not quite like being in hell. But being in college would be.

Bryant Gumbel:  “Do you view this as purgatory?”  A place you got to go to because you weren’t’ allowed into heaven, which is the NBA?”

ESPN named the teams for its ESPN RISE National High School Invitational that will be held April 3-5 at Georgetown Preparatory’s Hanley Center. These schools don’t have their own state tournaments so for a team like Dan Hurley’s St. Benedict’s club, it gives them a postseason title to compete for.

“This is exciting for us,” Hurley said. “In the past couple years, we haven’t had anything to build toward, but this year we have something at the end and that adds a little incentive to strive for and that should help.”

Syracuse Wins in Yet Another OT; Will Face Louisville for Big East Championship

NEW YORK – For all the talk