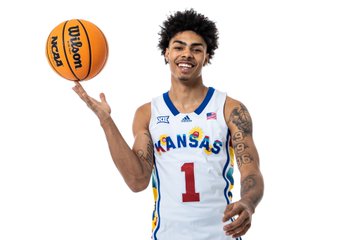 By JACOB POLACHECK Class of 2023 four-star guard Chris Johnson has committed to Kansas, he announced Tuesday. The 6-foot-5, 180-pound guard from Montverde (FL) Academy and the Houston Defenders AAU Program, chose the Jayhawks over Alabama, Ole Miss and Arkansas. “The coaches recruited me hard the whole time they where recruiting me,” Johnson told ZAGSBLOG by text. “You always want to go to a place that wants you, so that’s what I did!” Ranked by 247Sports Composite as the No. 9 combo guard and No. 33 overall prospect in the nation, Johnson is the first commit in Kansas’ 2023 recruiting class. “Chris is as talented as any guard in America,” Montverde coach Kevin Boyle said. “He has very good size, toughness and excels on both ends of the court. We feel if we develop his consistency and discipline he will emerge as one of, if not the top guard, of 2023.” Johnson’s commitment comes just over a week after he took his official visit to Kansas on July 25. “I bring a lot of versatility to them,” Johnson said. “I guard multiple positions on the floor and can put the ball in the basket!” Follow Jacob Polacheck on Twitter Follow Adam Zagoria on Twitter Follow ZAGSBLOGHoops on Instagram And Like ZAGS on Facebook