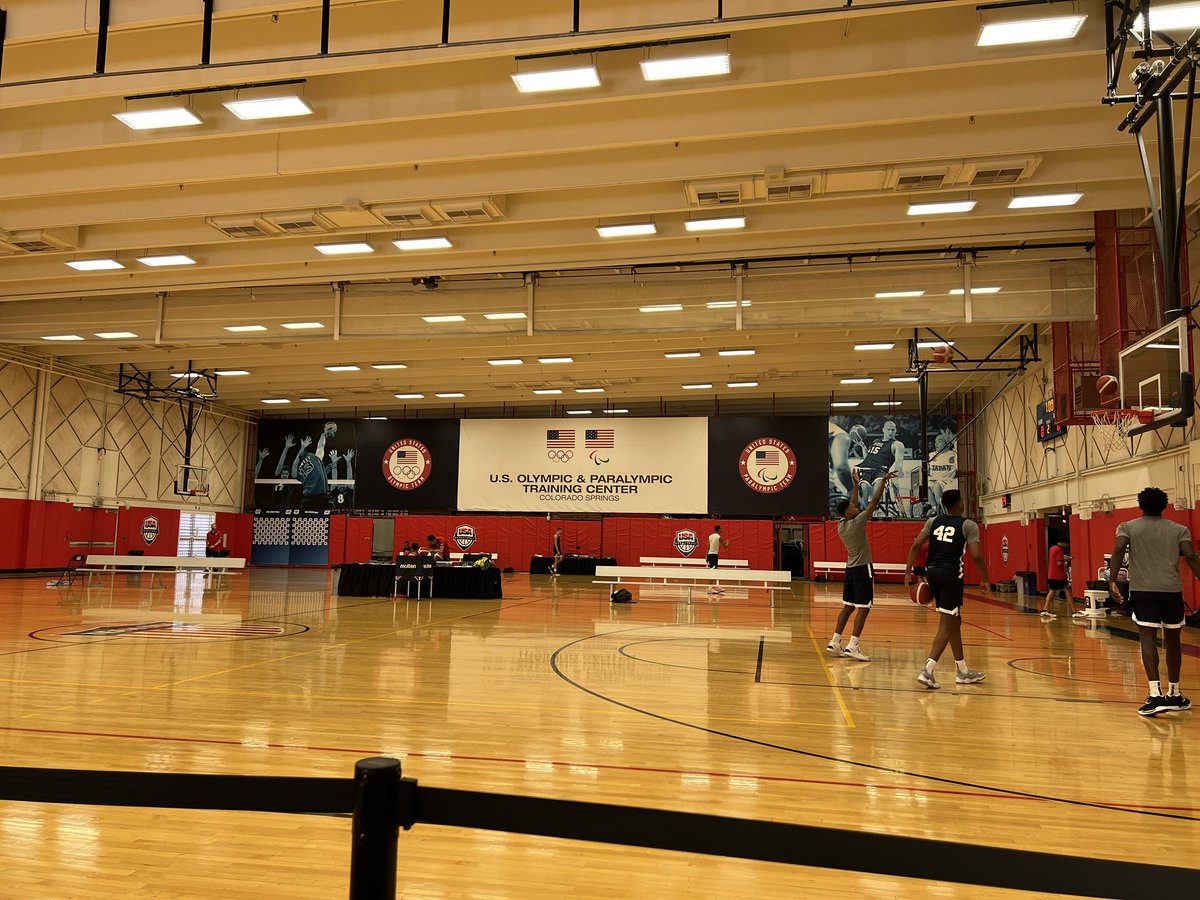 By MATT WHITFIELD COLORADO SPRINGS, Col. — Thousands of miles away from the New York tri-state area Ian Jackson (N.Y.), Naasir Cunningham (N.J.) and Tahaad Pettiford (N.J.) are all vying here this week for a spot on the 12-man roster of the USA Basketball U17 team that will travel to Europe to compete July 2-10 at the 2022 FIBA U17 World Cup in Málaga, Spain. They are among 35 athletes competing to make the final 12-man roster. “It’s a great accomplishment to put on for my city and represent my country if I make the team,” said Pettiford, a 6-foot-4 Class of 2024 point guard from Hudson Catholic. The 6-8 Cunningham, a fellow New Jersey resident, added: “It would mean a lot [to make the final 12]. It shows the hard work I put in to get here. And that it paid off.” Jackson, the 6-5 wing out of of Cardinal Hayes in The Bronx, sees it as a blessing. “It feels good to be one of the few selected from the East Coast, and to come out with Team USA is definitely a blessing,” said Jackson. Cunningham and Jackson are consensus top-5 recruits in the Class of 2024 and Pettiford is considered a top-50 recruit in 2024 per the ESPN and 247 rankings. The tri-state trio has many blue blood programs paying attention. “Tennessee, LSU, Norfolk State, and Auburn are offers and Kentucky just reached out and they’re interested,” said Pettiford. On Kentucky Pettiford added, “It’s a really big blue blood school. Coach Cal is a great coach one of the best to ever do it so it means a lot for him to call.” Pettiford recently took an unofficial visit to UConn and added, “I want to go to UCLA. I want to take an official to Tennessee and there’s more to come.” Jackson has picked up offers from Kentucky and North Carolina in recent days. “Kentucky likes the way I play,” he said. “Coach Orlando Antigua has been coming to watch me play for a while. He’s been advising me on my game for a while. He’s seen all the things I worked on and how much I’ve grown in a few months, so they really like my game and think I could come in and win a national championship with them.” North Carolina, which currently has a New York guard in R.J. Davis of Archbishop Stepinac and has Simeon Wilcher of Roselle (N.J.) Catholic coming in 2023, also offered. “Me and Coach [Hubert] Davis, we talked for about 10 to 15 minutes,” Jackson told Inside Carolina. “The conversation was about them getting to know me, not just as a player, but as a person. Same thing with my family. He asked me questions about them and what I liked to do away from basketball. He said he usually tries to watch a kid play once in person, but that from everything he’s seen and heard, I’m a really good kid, and the type of player he wants at Carolina. And then he told me he wanted to offer me a scholarship.”  Jackson holds offers from Kansas, Kansas State, Kentucky, Nebraska, Oklahoma State, Seton Hall, St. John’s, UCLA, and UConn. “I want to get out to UCLA to see what their campus is like,” he said. “Get out to Kentucky, Oregon, and probably Kansas. Those are schools I really want to get out to.” The Cardinal Hayes guard also mentioned that Oregon, Kentucky, and UNC are recruiting him the hardest. Cunningham, who recently opted to join Overtime Elite but maintain his college eligibility, has many choices if he decides to go the college route. One school seems to stick out though. “Growing up Duke was my dream school…taking an official visit to Duke is definitely something I want to do. Growing up and watching them I always loved that school,” said Cunningham. Cunningham started talking with Duke recently and says he hears from them about two to three times a week.   “The Duke coaches they contact me a lot,” he said. “We’re starting to build a relationship. They have a great coaching staff and a great program. Something I’m definitely looking forward to [in terms of being recruited by Duke].” Cunningham, whose former Gill St. Bernard’s teammate Mackenzie Mgbako is committed to Duke for 2023, stated he really enjoyed watching Kyrie Irving during his brief stint at Duke. Like Irving, Cunningham is a West Orange resident himself. Duke is one of many schools recruiting Cunningham though.
When asked what school are recruiting him pretty hard right now Cunningham responded, “Texas, Kansas, I’ve been talking to the Arkansas coach recently, Rutgers, and a bunch of schools.” Meantime, D.J. Wagner, the No. 1 prospect in the Class of 2023 from Camden High School, remains in the mix to make the USA U17 team but was unable to attend the training camp because he’s still in school. He played at Philly Live on Sunday, where coaches from Kentucky and Louisville watched him compete. Photo: Joe Tipon Follow Matt on Twitter Follow Adam Zagoria on Twitter Follow ZAGSBLOGHoops on Instagram And Like ZAGS on Facebook