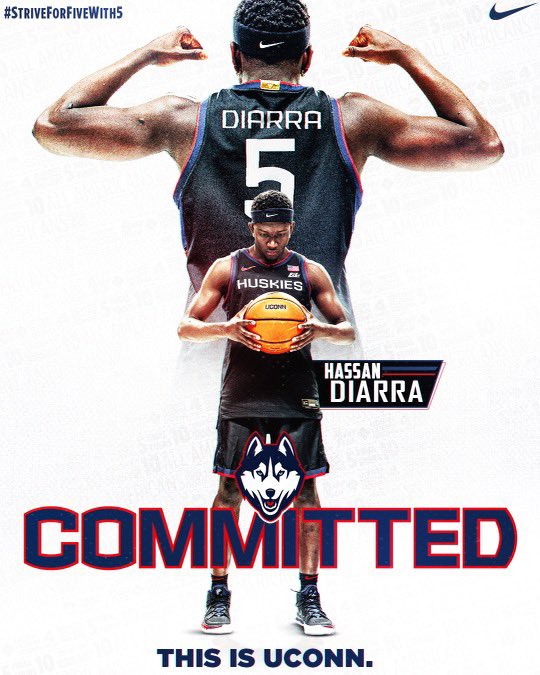 By ZACH SMART Following an inconsistent sophomore year at Texas A&M which saw his minutes fluctuate, former Putnam Science Academy (CT) guard Hassan Diarra has committed to UConn. “Bringing in my leadership, my competitiveness — Nahiem, Tristen , Andre, Adama — those are very good players,” he told Dave Borges of the New Haven Register. “Adding me as a piece to the puzzle, I can find those guys, get them open and have a lot of fun.” UConn previously added Virginia Tech transfer guard Nahiem Alleyne and high-scoring wing Tristen Newton from ECU to go along with returning pieces like Andre Jackson and Adama Sanogo. Diarra, who starred at PSA under head coach Tom Espinosa, authored a memorable career as a poised shot-maker and high-scoring point guard who often delivered during crunch-time situations. The 6-foot-2 Queens native averaged 6.2 points and 1.8 assists in 40 games this past season at A&M. He showed promise during a 17-point performance in a 73-67 win over Notre Dame and had 14 points, 3 steals, and 3 assists during an 83-80 OT victory over Florida. Still, he never established the role many envisioned when he was a hotly pursued, Top-100 recruit coming out of PSA. “Hassan Diarra will quickly become a fan favorite,” said Putnam Science assistant Josh Scraba. “He’s a warrior. Guys that bring it every single time they hit the floor are rare and he doesn’t know any other way.” Diarra initially committed to A&M in 2019 over Georgia, Indiana, Texas Tech and Iowa State. UConn saw three guards transfer out in Corey Floyd Jr. (Providence) Jalen Gaffney and Rahsool Diggins (UMass), as well as forward Akok Akok (Georgetown). Follow Adam Zagoria on Twitter Follow ZAGSBLOGHoops on Instagram And Like ZAGS on Facebook