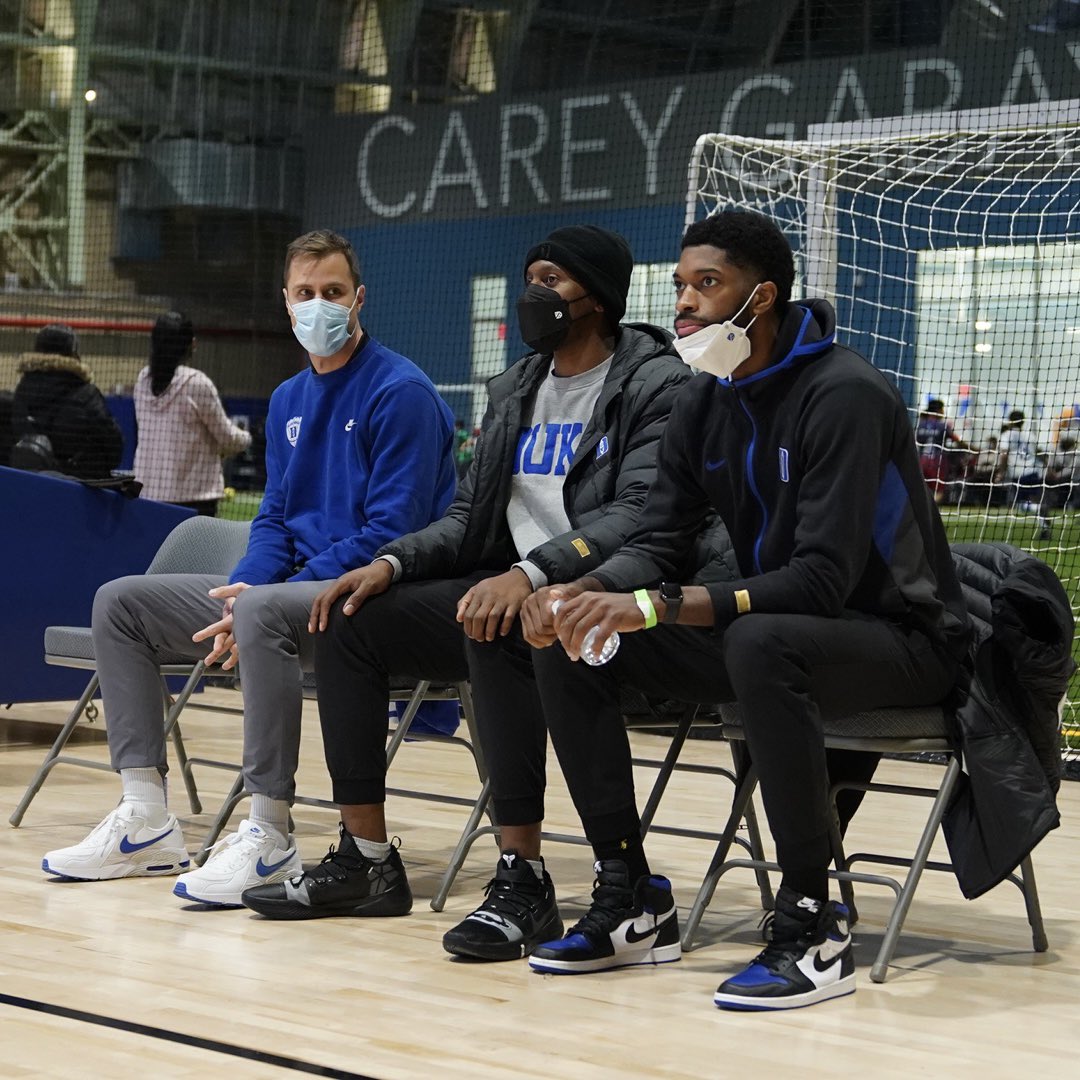 By JAQUAM BODDEN & ADAM ZAGORIA NEW YORK — Dereck Lively II and Kyle Filipowski have yet to play a game together at Duke, but the duo already believes they will complement one another as teammates in the Atlantic Coast Conference. The 7-foot-1 Lively and the 6-11 Filipowski are part of Duke’s No. 1-ranked recruiting class and faced off Sunday at the Empire Invitational in Brooklyn with Duke coach-in-waiting Jon Scheyer and assistants Nolan Smith and Amile Jefferson on hand. “I’ve grown up with a twin brother who’s 7 feet so I know how to definitely play with another guy my size around me,” Filipowski, whose twin brother Matthew is committed to Harvard, said after going for 22 points as his Wilbraham & Monson (MA) team beat Lively and Westtown (PA), 59-54. “I think we’re the perfect high-low combination, we both can go inside or outside so we’re interchangeable just like that and I don’t think you can get a better front court in the country.” Lively, who had 16 points in the loss, said his experience playing on Team Final with current Memphis freshman big man Jalen Duren will prepare him for playing alongside Filipowski. Team Final won the prestigious Nike Peach Jam this past summer with a star-studded team featuring Duren, Lively, current UConn redshirt freshman Corey Floyd Jr., LSU freshman Justice Williams and Oklahoma commit Otega Oweh, who was named MVP of his game at the Empire Invitational. “After playing with Jalen Duren, it just makes it easy,” Lively said of playing with Filipowski after going for 16 points in the loss. “Just spacing the floor and being able to go at one defender instead of two or three, I just can’t wait to get to Duke.” The duo is part of a loaded six-man recruiting class that also includes shooting guard Jaden Schutt, small forwards Dariq Whitehead and Mark Mitchell and center Christian Reeves, who is expected to redshirt. Both Filipowski and Lively displayed their versatility and athleticism throughout the game, from their countless dunks to their perimeter shooting. They guarded one another at times. Lively displayed his ability to defend the perimeter and at one point during the fourth quarter blocked a player’s shot at the top of the key (not Filipowski’s). Filipowski showed the ability to score in transition while flashing his ball-handling skills. “Dereck and Kyle will be fantastic combo next year,” said Wilbraham & Monson coach Mike Mannix. “Dereck gives you the athletic rim protector who can knock down shots as well as do a lot of damage in the paint. I don’t think he gets enough credit for his footwork in the post. He makes good patient post moves. “Kyle is comfortable playing in the middle of the floor as well as using ball screens to score and set up other guys. He and Lively could be very interesting to watch in that action. A 6-11 guy going ‘two-man game’ with his 7-foot teammate. Good luck game planning to stop that.” Before they arrive at Duke next fall, each player wants to continue developing aspects of his body and game. “‘For me, definitely getting my body right,” Filipowski said. “I want to be in tip-top shape when I get to Durham because just the ACC level playing-wise is different. And just getting my overall game a little more consistent with my 3 and my handle.” “For me it’s just really gaining weight and just keeping my body in the best condition,” Lively said. Filipowski became the first player to commit to Scheyer in July, while Lively followed suit in September. In Duke’s succession plan detailed in this New York Times piece, Scheyer was out on the recruiting trail this past summer while coach Mike Krzyzewski spent more time on campus with the current team, currently ranked No. 2 but likely to tumble a little in the AP Poll after Saturday’s loss to Miami at Cameron Indoor Stadium. One day after that heartbreaking loss, Scheyer and his staff were back watching their future players. “That’s one of the reasons why I chose Duke because of the coaching staff, how much they feel like a family to me, how much they feel that love,” Filipowski said. “Having them come up to see both of us go head-to-head is definitely something special.” Added Lively: “Just knowing that we’re going back and forth on each other’s necks and they’re watching so they can critique us and our games to get better. That’s all we want to do.” Photo: Empire Invitational Follow Adam Zagoria on Twitter Follow ZAGSBLOGHoops on Instagram And Like ZAGS on Facebook

Class of '23 point guard Kylan Boswell down to 8 schools, looking to make a decision 'sooner rather than later'