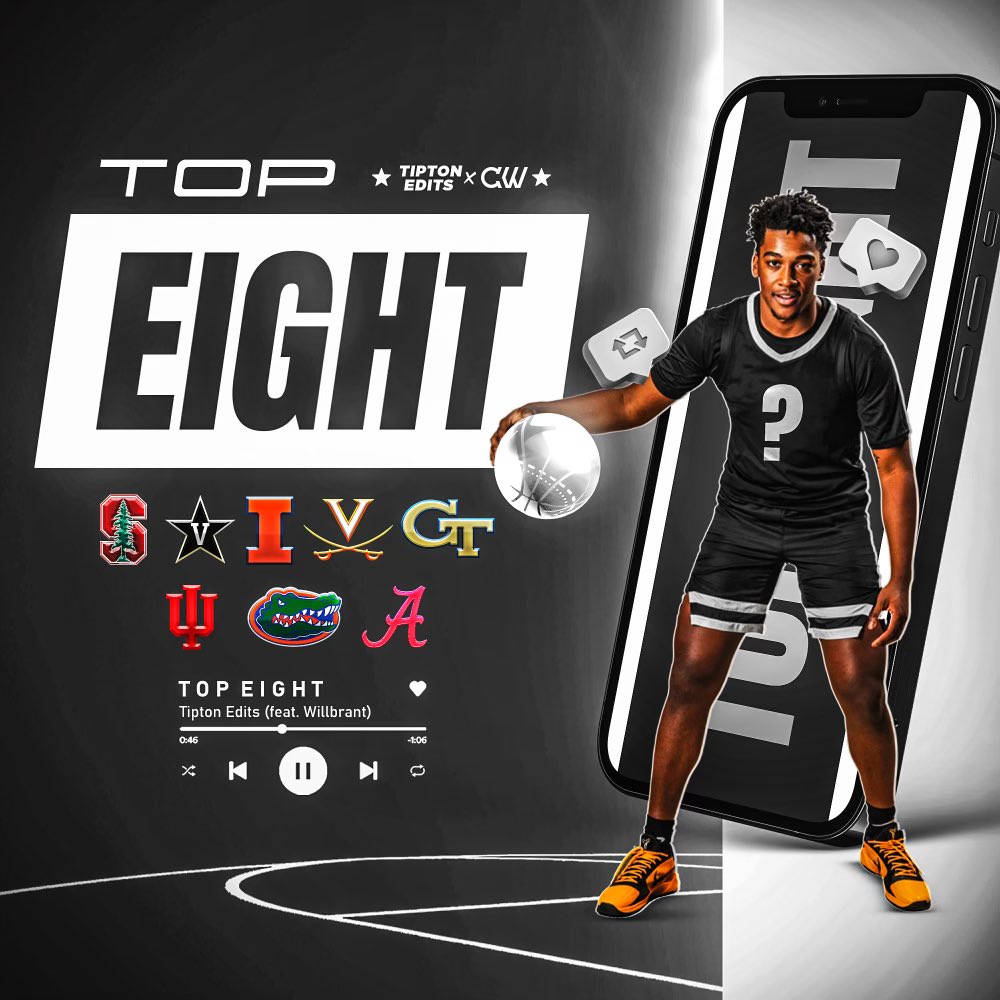 By ADAM ZAGORIA Brice Sensabaugh, the 6-foot-6, 230-pound small forward from Lake Highland Prep (FL) and Each1Teach1, announced his top eight schools Friday and then broke down each school for ZAGSBLOG on Saturday. Ranked the No. 28 small forward in 2022 per 247Sports.com, he is considering Stanford, Vanderbilt, Illinois, Virginia, Georgia Tech, Indiana, Florida and Alabama. Sensabaugh averaged 18.7 points, 4.0 rebounds and 1.3 assists per game for E1T1 at Peach Jam. Stanford: “I had been talking with them for a while even before anything really picked up for me, for a year. They stayed honest with me, and honestly academics is super important to me so a school like that is [appealing]. Their pitch is it’s a great academic school where they’re still serious about basketball obviously in the Pac-12. It will be a great opportunity.” Vanderbilt: “Vanderbilt was kind of the same way. I’ve been in touch with them for a long time as well. Before my recruitment really picked up, they had me for an unofficial visit and they were super nice to me, super good to me, and they showed me all around and they were honest with me as well. AS the summer went along and I started to get more attention, they were one of the first ones who jumped in and they bet on me and it’s a great school in the SEC. I like how the SEC plays so that would be a great opportunity as well.” Illinois: “They jumped in during Peach Jam, super prestigious school and in the Midwest is great basketball culture. They had a bunch of success last year and coach [Chester] Frazier has known who I was for a while and he kind of waited on me to get a little better but he eventually invested in me and that’s a good school as well.” Virginia: “The situation is really similar to Stanford. I had been talking to them way back before. It’s a great school in the ACC and with great academics and basketball. Super prestigious school, national champions and everything so that would be a great opportunity. And coach Tony Bennett is a great guy as well.” Georgia Tech: “Georgia Tech, I’ve been to Atlanta a lot and the location of the school is great. They also have the best of both worlds, a great academic school, No. 1 public school in the country in terms of academics, and they’re coming off an ACC championship where the basketball culture is great, too. The staff is one of the coolest staffs I’ve talked to, they’re super-honest with me and they expressed their need and want for me a lot so it’s always a great time talking to them.” Indiana: “I like them, too. Obviously, coach [Mike] Woodson is a super prestigious coach and he has a lot of credibility. And the rest of the staff is cool, too. I enjoy talking to them. And same thing with the Midwest culture. When I posted the Indiana offer, the post went crazy. They said, ‘We want you to come,’ so that was good to see.” Florida: “Florida obviously being close to home. They brought me in for an unofficial as well and offered me on the visit. I’ve known personally a couple people who’ve gone there and played basketball so I can learn from them and they can let me know what they have to offer. When I went there it was a great team. I got to watch practice so that was a great time as well and it was good to see.” Alabama: “I like them, too. Their staff is super cool and they expressed their need and want a lot for me as well, too. I also love the way they play, the tempo. Part of the SEC, they like to play fast. I like to shoot 3s and they put emphasis on shooting 3s.” Sensabaugh said he has no timetable on either cutting his list or making a decision. “I’m going to continue to move forward and do the math on what’s going to fit me best,” he said, “but I’d like to commit by the early signing period so hopefully by October. We’ll see.” Follow Adam Zagoria on Twitter Follow ZAGSBLOGHoops on Instagram And Like ZAGS on Facebook