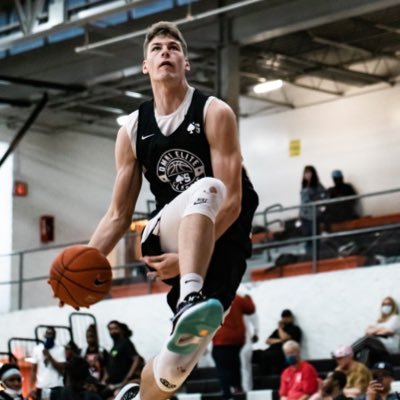 By JACOB POLACHECK Kentucky has extended an offer to Class of 2022 four-star center Kyle Filipowski, he announced via Twitter. The Wildcats extended Filipowski an offer by Zoom Monday. The 6-foot-11, 230-pound center from Wilbraham & Monson (MA) and the NY Rens, has already taken official visits to Syracuse (June 5-6), Ohio State (June 12-13), Indiana (June 15-16), Duke (June 28-29) and Iowa (June 30). “(John Calipari) saw him for the first time at Peach Jam,” Wilbraham & Monson coach Mike Mannix said. “(Orlando Antigua) and (Bruiser Flint) told Cal about Kyle during the spring and they wanted to make Kyle a priority at Peach Jam.” He also took unofficial visits to Northwestern (June 19) and UConn (June 24). According to 247Sports.com, Filipowski is ranked as the No. 8 center and No. 40 overall prospect in the Class of 2022. If Filipowski were to choose the Wildcats, he would be the second player from Wilbraham & Monson to commit to Kentucky, joining Wenyen Gabriel, who played at UK under head coach John Calipari from 2016-18. Kentucky currently has the nation’s No. 16-ranked recruiting class in 2022 with a commitment from five-star guard Skyy Clark. This story has been updated. Follow Jacob Polacheck on Twitter Follow Adam Zagoria on Twitter Follow ZAGSBLOGHoops on Instagram And Like ZAGS on Facebook