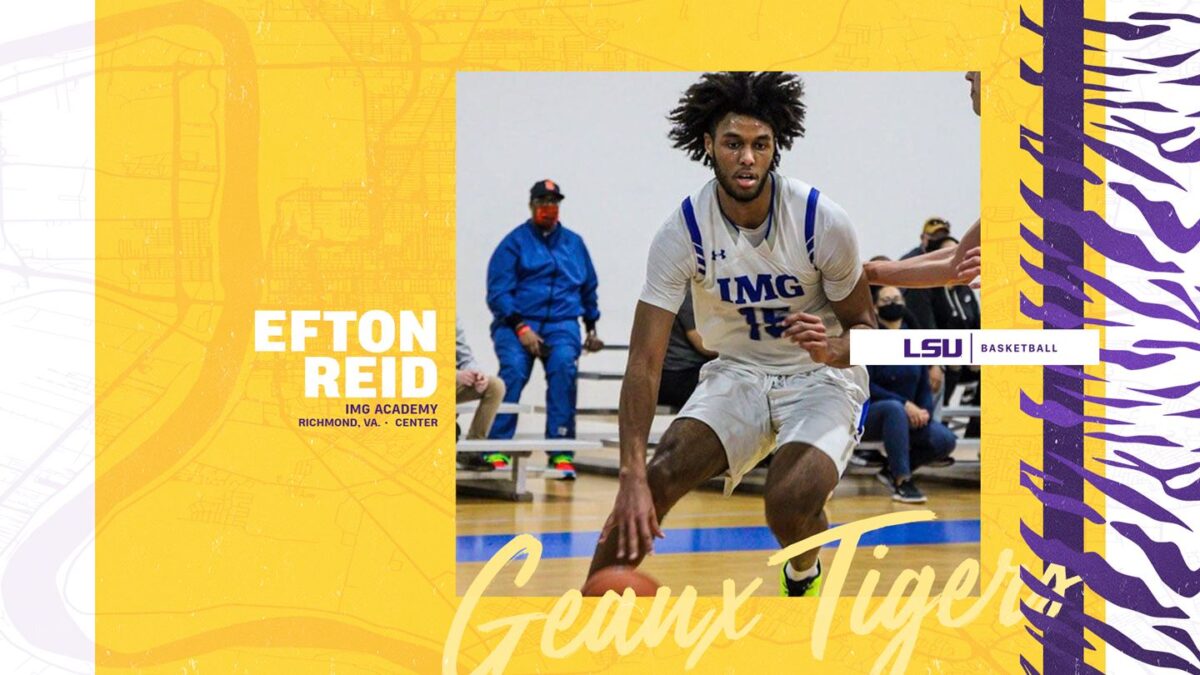 By ADAM ZAGORIA Five-star center Efton Reid turned down the Overtime Elite league in favor of attending college at LSU because the new professional league plans to play against prep school opponents in its inaugural season in 2021-22, Reid’s mother told ZAGSBLOG. “Sure they offered but Efton decided to go to college because he did not want to repeat playing prep leagues again,” Reid’s mother Maria said. “He did that at IMG [Academy] and did not want to repeat another year playing against prep schools. He wants to play against the next level college ball.” Ranked the No. 2 center in the Class of 2021 per 247Sports.com, the 7-foot-Reid committed to LSU last Sunday over Pittsburgh, Florida State and others. He had initially said he would announce two days earlier — on Friday — but did not end up announcing then. Instead, someone posted a fake social media post that Friday indicating Reid had committed to Pitt. Several high-profile college basketball reporters were even fooled. Later on Friday, Reid took to Twitter to tell his followers, “Patience, y’all.” Somewhere during the process, Reid and his mother had at least one Zoom call with the Overtime Elite league in which they made an offer. She declined to say for exactly how much but the league has advertised offering six-figure salaries to 30 elite high school prospects. “We did a zoom call and they said he would be playing against prep schools,” Maris said. “Efton declined.” It’s unclear which prep schools teams would be willing to play against a team comprised of professional players as it might compromise the eligibility of the prep school players. One source said the Overtime League reached out to Spire Academy in Ohio — the independent team for which LaMelo Ball, Rocket Watts and Isaiah Jackson played two seasons ago — to gauge their interest in games next season. But a person connected with Spire advised school officials to do their due diligence before committing. “I advised them to reach out to the NCAA for guidance and clarification and told them if the NCAA clears it, I wouldn’t play unless I had the roster to make the [game] at least competitive,” the source said. It seems almost certain that the nation’s top private schools teams such Montverde (FL) Academy (the reigning GEICO High School National champions), Oak Hill Academy (VA), La Lumiere Academy (IN) and others would go nowhere near the Overtime teams. Those schools formed their own league last season — the National Interscholastic Basketball Conference (NIBC) — and will play again during the 2021-22 season with the addition of IMG Academy. (Those games will be featured on the ESPN networks and a full release is expected next week.) One of those coaches said they “wouldn’t consider” playing against the Overtime League. That would leave more independent-type schools like Spire or the YPSI Prep team that this past year featured Emoni Bates. But again, those schools could be risking the eligibility of their players by competing against pros. The Overtime Elite league is casting a wide net, even to players in the Class of 2022. One coach of a star guard in that class said the league reached out to his player “and we stopped that.” “I was assured there would be no more contact,” the coach said. The Overtime Elite league does have the backing of stars like Carmelo Anthony, Kevin Durant and Baron Davis, but has yet to announce the signing of a single player ahead of its scheduled September start. Even NBA Commissioner Adam Silver has endorsed the new league. “To me, options are a good thing…” Silver said recently. “I think it’s generally good for the community to have optionality, especially when very solid people, which appears to be the case in this league that’s just been announced, are backing it and behind it. That’s one thing we will pay a lot of attention to because those young players are potentially the future of our league. We want to make sure that both on the court and off the court they’re getting the right mentoring and guidance. “But overall, I think it’s good for the game. It’s more focus on the game. Especially all that’s happening now in digital media, social media, new streaming services, there’s definitely interest in this content.” The NBA is already supporting the G League Ignite team which pays players six-figure salaries for the year they would have gone to college. Projected lottery picks Jalen Green and Jonathan Kuminga were among those on the Ignite this past season when they played a limited schedule in the G League bubble in Orlando in March, while Mike Foster has already signed on for the 2021-22 season and Jaden Hardy is expected to follow suit. Reid, meantime, turned down a six-figure salary in the Overtime Elite league in favor of playing for coach Will Wade at LSU. “Efton will make an immediate impact for us on both ends of the court,” Wade said in a statement. “He is very skilled on the offensive end. Efton has tremendous touch and footwork around the rim to pair with an expanding perimeter game. Defensively, his size and length will give us the rim protection that we need. We are very excited to welcome Efton, Maria and Alex to the LSU family!” Follow Adam Zagoria on Twitter Follow ZAGSBLOGHoops on Instagram And Like ZAGS on Facebook

Who were the top prospects at the 'Who Want the Smoke' event in Dallas?