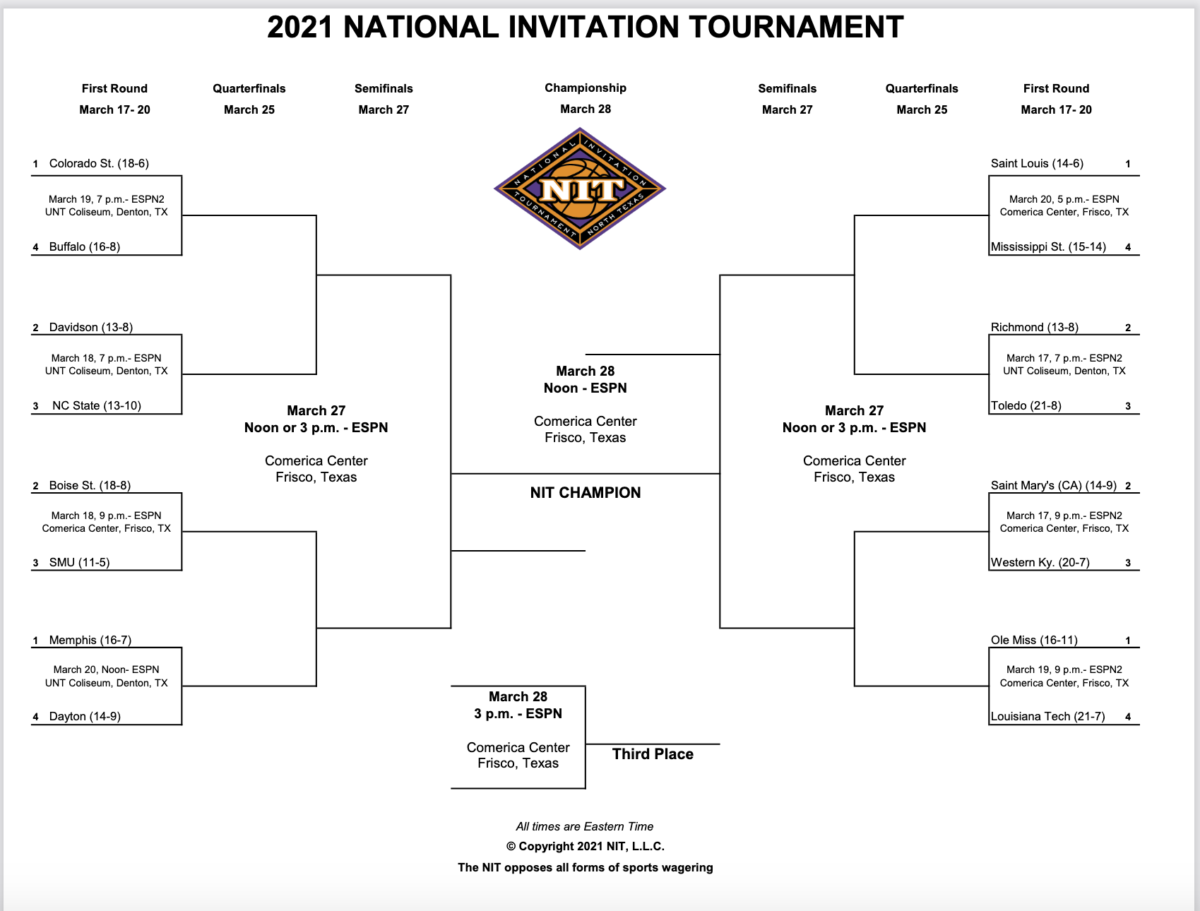 Colorado State, Saint Louis, Ole Miss and Memphis highlight the 16-team National Invitation Tournament field released by the NIT committee Sunday. The 2021 NIT will be hosted by Conference USA and the University of North Texas with all games played at either Comerica Center in Frisco, Texas or UNT Coliseum in Denton, Texas. Several teams, including Seton Hall and St. John’s, opted not to play in the NIT. First round play is scheduled for Wednesday, March 17 through Saturday, March 20.   Quarterfinals will be held on Thursday, March 25 in both Frisco and Denton. Semifinal games will be played Saturday, March 27 with the third-place game and championship played on Sunday, March 28. The semifinal and championship games will be played at Comerica Center in Frisco, Texas. First round action features number one seeds Colorado State, Memphis, Ole Miss and Saint Louis hosting Buffalo, Dayton, Louisiana Tech and Mississippi State, respectively. Other first round games include Davidson against NC State, Boise State against SMU, Richmond against Toledo and Saint Mary’s (California) against Western Kentucky. Dayton is making its 26th appearance in the National Invitation Tournament, the most of any school in the 2021 field. All 16 teams in the NIT field have appeared in at least one previous NIT. Due to the unique circumstances of the 2020-21 season, institutions were asked to confirm, in advance, their intentions to play in the NIT if selected. As a result, some teams that may have otherwise been selected to the NIT chose not to participate in 2021. “First of all, I want to congratulate all of these 16 teams not only for making a great field but also navigating through a challenging season,” said Judy Rose, director of athletics emerita at Charlotte and chair of the NIT Selection Committee. “I’m extremely proud of the work the committee did this week and we are excited about the tournament. We have an extremely competitive field and we look forward to tipping off Wednesday.” NIT games are being televised by ESPN and ESPN2. Additional NIT information can be found on www.NCAA.com/NIT. Follow Adam Zagoria on Twitter Follow ZAGSBLOGHoops on Instagram And Like ZAGS on Facebook

The NIT bracket is out and St. John's isn't in it; Iona to visit Florida