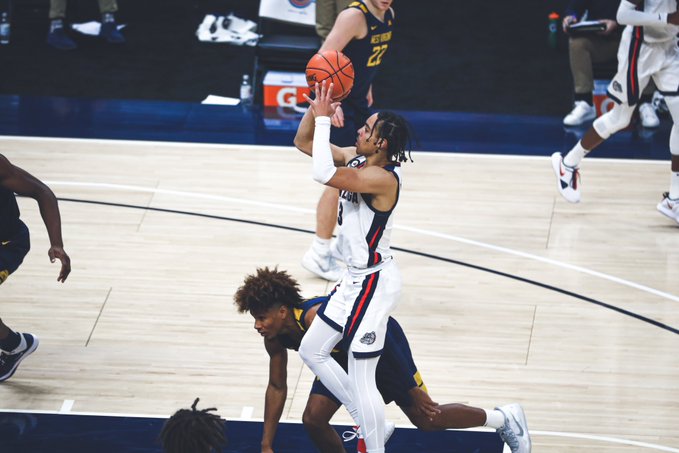 By JACOB POLACHECK No. 1 ranked Gonzaga narrowly avoided an upset and a serious injury to freshman star Jalen Suggs in the Jimmy V Classic on Wednesday night. The Zags beat No. 11 West Virginia, 87-82, behind 21 points, seven rebounds, four assists and four steals from junior guard Joel Ayayi and 19 points apiece from Corey Kispert and Andrew Nembhard. The Zags also avoided disaster after Suggs left the game in the first half with a left ankle injury. Suggs was helped to the bench and walked to the locker room with assistance. While there was no official injury ruling at the time, Suggs remained in the locker room and was later seen testing the ankle in the tunnel after being evaluated. Suggs checked back into the game after the under-16 minutes media timeout in the second half. He was still limping when he returned to the game. “At first, we were kind of disappointed because we all love Jalen,” Nembhard said. ”Him coming back in the game was big for us. He played football so you know he’s tough and we’re pretty versatile so we could do some different things in the second to help him out. It worked out well for us.” Suggs finished with four points, five assists and six rebounds – much of that production coming after he went down with what initially appeared to be a serious left ankle injury. The 6-foot-4, 205-pound freshman guard from Saint Paul, MN, is projected by ESPN as the No. 18 overall prospect in the 2021 draft class. “Jalen going down and the fact that they were throttling us on the glass and throttling our offense for a while,” coach Mark Few said, explaining the obstacles his team had to overcome. ”That’s basically how I think a lot of our games are going to go. I don’t think they’re going to be a flowy as they were down in Florida.” Next up for Gonzaga (3-0) is a matchup with No. 2 ranked Baylor in Indianapolis on Saturday. The Bears looked very impressive in an 82-69 win over No. 5 Illinois in the second game. West Virginia (3-1) will play Georgetown on Sunday. (The AP contributed reporting) Photo: Gonzaga Athletics Follow Jacob Polacheck on Twitter Follow Adam Zagoria on Twitter Follow ZAGSBLOGHoops on Instagram And Like ZAGS on Facebook