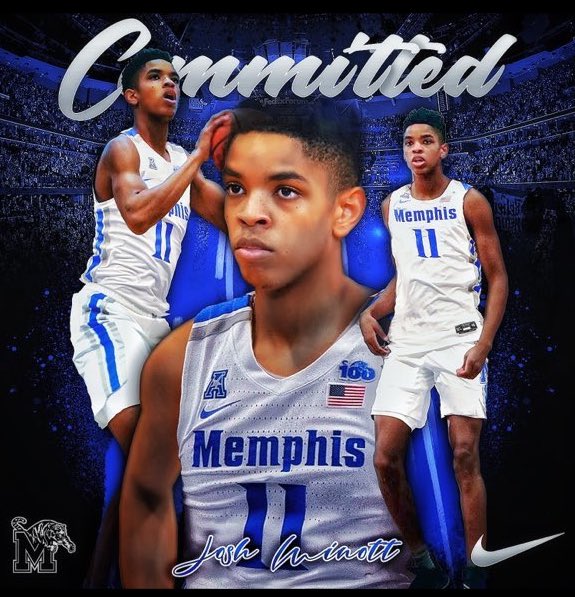 By ADAM ZAGORIA Joshua Minott might still be an under-the-radar name nationally, but those around him believe he has pro potential. “Oh absolutely,” said Roosevelt Gray, who has coached Minott with Team Parsons since he was in sixth grade and also coached Mitch Richmond, David Benoit and Reggie Cross. Minott, a 6-foot-8 1/2, 190-pound wing out of Boca Raton (FL) St. Andrew’s School, committed to Memphis on Saturday over Florida State, he told ZAGSBLOG. He also considered Baylor, Maryland and Texas. Minott is a four-star prospect ranked as the No. 18 small forward by the 247Sports.com Composite. “I will be taking my talents to the University of Memphis,” Minott said in a phone interview prior to his public announcement. “I like the whole Penny Hardaway situation. He has that history of being that big guard. He’s like an NBA legend basically. I already feel like I have the exact build because I have that height and the guard skills, so I feel like he’d best be able to coach me because he’s been through it himself.”

Minott averaged 17.2 points, 7.4 rbounds, 3.1 assists, 2.7 blocks and 2.1 steals last season, while shooting 60 percent from the field and 33 percent from deep. Memphis assistant Cody Toppert, known for his ability to develop players, was the lead recruiter on Minott.

Hardaway was the No. 3 pick in the 1993 NBA Draft and went on to become a four-time NBA All-Star. Minott wants to follow Hardaway into the NBA. “Definitely,” Minott said. “He says that he can turn me into the guard I want to be. I see these writeups that say I’m a ‘stretch four,’ but it’s not really like that. I’m someone who can bring up the ball, can dribble, shoot, pass, make all the right decisions. He says he recognizes that and can turn me into the kind of guard I want to be.” Minott helped lead St. Andrew’s to the Florida Class 3A state championship in March. He went for 19 points and 10 rebounds in the semifinals and 13 points in the championship game.

Gray compares Minott to a young Kevin Durant. “Josh’s best basketball is ahead of him because he hasn’t even scratched the surface,” Gray said. “When I said I had the next Kevin Durant, I was just talking about his length. But as far as the handles, he’s more of a point guard than Durant will ever be because he can go one, two, three, but he’s such a mismatch for everybody because he can play the point. He can facilitate.” Gray said Minott actually did play the point at a recent AAU event in Atlanta. “They still had a big on him while we were running the spread offense, you can’t guard him with a big,” Gray said. “You put a guard on him, he’s too small. We look for those kind of mismatches and we get them every game. “He’s got all the skills and everything. The biggest thing he’s got, he’s got a work ethic that’s second to none. He’ll work seven days a week. When you get a kid that works as hard as he does and wants it as bad as he does, that’s half the battle right there.”

Said Minott of playing the point: “It’s definitely something I’m comfortable with, bringing that ball up. I have confidence in my dribble. I don’t feel like people can steal it from me easily.” As far as his NBA dreams, Minott wants to get there but isn’t concerned with how long it will take. “It just depends on my development,” he said. “As soon as possible where I’m ready. I don’t want to rush but wherever the development takes me.” Follow Adam Zagoria on Twitter Follow ZAGSBLOGHoops on Instagram And Like ZAGS on Facebook