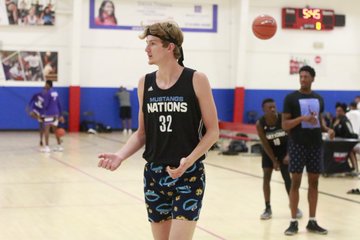 By JACOB POLACHECK Class of 2022 big Cade Hornecker has been busy these last few weeks, picking up his first five offers in his recruitment. Hornecker, the 6-foot-10, 205-pound center from Amarillo (TX), currently holds offers from Wichita State, Oral Roberts, TCU, Creighton and Kansas State. He broke down each school for ZAGSBLOG Thursday: Wichita State: “That was exciting because it was my first offer. I’ve been to Wichita State like four times to look at it because I used to go there every summer for a tournament. I thought it was cool that they wanted to offer me. I like their coach.” Oral Roberts: “I talk to their coach a lot. He’ll call me or text me a couple times a week. I like them a lot. They seem really interested in me and I like their culture over there. They’re a christian school so I think that’s good stuff.” TCU: “They haven’t been calling as much lately. They’re probably busy so I’m not tripping. That was cool because I’ve been to some games there. When we go to Dallas for tournaments we’ll go watch. They have a cool gym and a great program.” Creighton: “That was a cool offer. Their head coach [Greg] McDermott called me so that was cool. They always have some big dudes out there so that’s always a good thing to hear that a program wants someone like you.” Kansas State: “They talk to me a lot. They’ve called or texted at least every day this week. That’s cool and it shows that they care. It’s not too far from home which is always a cool thing. And they’re purple and I like purple.” Hornecker has also received interest from Houston, Butler, Oklahoma State, Oklahoma, Kansas, Gonzaga, Air Force, Virginia, Baylor, Tulsa, UTSA, BYU, Stanford, Purdue, Incarnate Word, North Texas, Belmont, Columbia, Texas Tech, Texas-Arlington and Georgia State.  Both of Hornecker’s parents attended Baylor University and he took an unofficial visit to Waco in the fall. “I went through a little practice, workout type thing with some players there,” Hornecker said. “That was cool. They definitely know how to put some muscle on their big dudes out there. Those guys were big. “They’ve got a nice stadium, nice facilities and I like their coaches. Waco is cool too. I’ve been to Waco a bunch.” Hornecker also took an unofficial visit to Oklahoma State to see the OSU football team play Oklahoma on November 30. They have a great college town down there,” he said. “The football game was a lot of fun. I really like their coaches. Stillwater is just a cool place. They’re really involved with their school and sports.” With the coronavirus pandemic still preventing high school recruits from taking visits, Hornecker hopes to take visits sometime soon. “I’d definitely like to go and look at some schools this summer, definitely in the future,” he said. “If I can’t then I can’t. “I’ll still do FaceTimes, Zooms and all that fun stuff. If I can, I would definitely be interested in looking at some schools.” When evaluating these schools, Hornecker says he’s taking in a number of factors: “How they play, for sure,” he said. “How much do they use their bigs, their pass-developing bigs? Do they put muscle on their big dudes, help them gain weight and develop them, make them NBA ready? “That’s my ultimate goal, hopefully to play in the NBA. Just stuff like that, good culture and how I like the coaches. That has a lot to do with it.” This offseason Hornecker is training from home to prepare for the upcoming season. “My goal is definitely to win back-to-back state championships these next two years,” he said. Amarillo returns their entire starting lineup from the 2019-20 with Hornecker, Brendan Hausen, Chris Dees, Owen Boyett and Damonze Woods. Hornecker, Hausen and Woods have been playing together since the third grade. “Our chemistry is great,” Hornecker said. “We just get out there and play. If you watch our games, we’ll definitely yell at each other and get mad at each other, but it’s what we have to do. It’s easy to play with them. It’s how it’s been forever.” Photo: Extra Eyes Media Follow Jacob on Twitter Follow Adam Zagoria on Twitter And Like ZAGS on Facebook