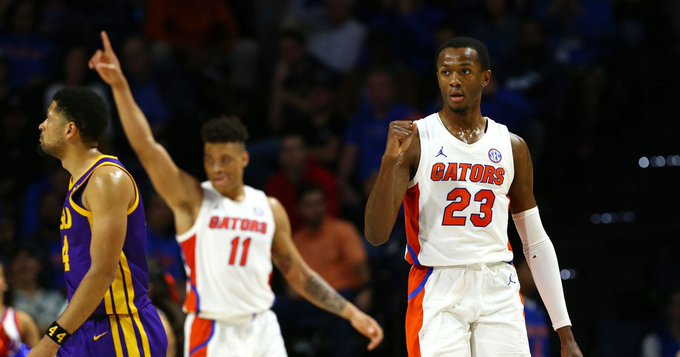 By JACOB POLACHECK Florida freshman Scottie Lewis will return to Florida for his sophomore year, he announced Monday via Twitter. “Gator Nation, as you all know we have some unfinished business! Our season was cut short, and we were not able to complete our season that we were supposed to,” Lewis wrote in a statement via Twitter. “My dream of playing in the NBA is still a top priority, but my heart is in Gainseville! “With that being said, I am more than happy to announce that I will be returning for the 2020-21 season,” he wrote. “I want to thank my teammates, my coaching staff and most importantly my family for their unconditional love and support throughout this entire process! I am excited for the journey that lies ahead. My story hasn’t even started and trust me THE BEST IS YET TO COME!” Lewis, a former McDonald’s All-American, averaged 8.5 points and 3.9 rebounds while shooting 44.1 percent from the field in 30 games played. He established himself as a lock-down defending and a player that thrives in transition. Before announcing his return, Lewis was listed by ESPN as the No. 38 best available prospect in the 2020 Draft. Lewis attended Ranney School (NJ) and was teammates with Villanova freshman Bryan Antoine. Both Lewis and Antoine were projected lottery picks coming out of high school. Photo: Kim Klement/USA TODAY Sports Follow Jacob on Twitter Follow Adam Zagoria on Twitter And Like ZAGS on Facebook