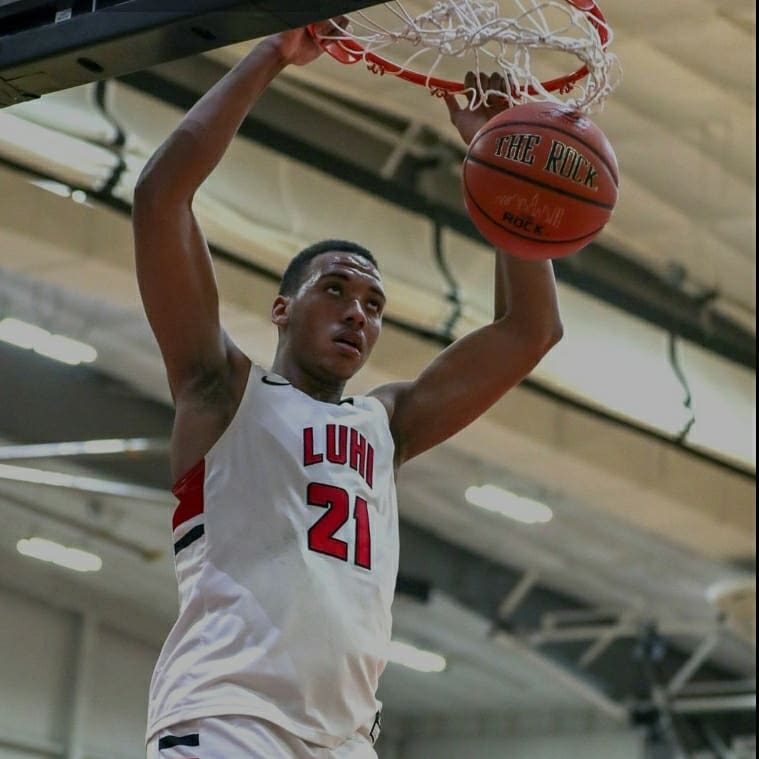 By ADAM ZAGORIA GLEN HEAD, N.Y. — If Ohio State point guard C.J. Walker wants to pad his assists totals next season, he may want to get the ball to incoming freshman Zed Key in the paint. The 6-foot-7 Key was unstoppable down low this week, averaging 31 points and 14 rebounds as Long Island Lutheran beat Sierra Canyon (CA) on Saturday night at the Metro Classic and then topped The Patrick School (N.J.), 68-63, Thursday night in an electric atmosphere on the campus of the Long Island school. Key went for 37 points and 16 rebounds against the Celtics, who feature junior forwards Adama Sanogo and Jonathan Kuminga, the No. 1 junior in the nation. Key did all of his damage in the paint and with little to no dribbling, scoring on an assortment of layups, putbacks, dish-offs from Illinois-bound point guard Andre Curbelo and post moves off of some nifty fakes. “He embarrassed us in the paint,” Patrick School coach Chris Chavannes said. “He was outstanding, not just on the offensive end. He was active on both ends of the floor. He hurt us on both ends of the floor.”

Ohio State signee @iamzedkey putting on a show in the paint pic.twitter.com/ocYbBcoQyV

Key credited his teammates with feeding him in the right spots, but Key was also very active on the offensive glass, consistently out-maneuvering and out-hustling the Celtics’ bigs. “I had 37 because they gave me the ball in the right spot,” said Key, who in September chose Ohio State over Marquette, Florida, Providence, Rutgers and St. John’s. “[I scored with] a lot of offensive rebounding and boxing out and grabbing rebounds and a lot of post play. I’ve been playing the post all my life so I have a good feel around the rim, good touch and I’m sneaky athletic so I can get off the floor and dunk so that’s my game.” On Saturday, Key put up 25 points and 12 rebounds when LuHi (20-3) topped Ziaire Williams, B.J. Boston and Sierra Canyon in New Jersey. “It was one of the greatest weeks in LuHi history,” Key said, “to beat a team ranked higher than us and then come here on our home court and beat the Patrick School. This team is something special.”

After putting up 23 points, 10 rebounds, 6 assists and 3 steals in the 86-74 win over Sierra Canyon (CA), Curbelo had 10 points, 10 assists, 8 rebounds and 5 steals with Illinois coach Brad Underwood and two assistants watching courtside on Thursday. Nebraska coach Fred Hoiberg and assistant Matt Abdelmassih, Penn State assistant Kevin Freeman and St. John’s assistant Van Macon were also on hand. Curbelo and Key showcased their chemistry in which the point guard found the big man in transition for easy buckets. “He’s an amazing kid, man,” Curbelo said. “Ohio State’s getting a great kid. Thirty-seven and 16 against a big-time program with five-star kids, you don’t see that a lot of times. A lot of kids hide, get a little shy, they don’t do it. “And like you said, he doesn’t dribble a lot just because I’m able to find him. Me and him, we’ve been playing for four years, our connection is insane and when we play with each other, it’s great because I make him look, he makes me look good….He still made me look good because every time I pass him the ball he’ll dunk it or score.” Key scored 12 of LuHi’s 14 points in the first period when the Patrick School got off to a 22-14 lead behind nine points from Kuminga. By halftime, Key had 18 as LuHi closed the gap to 33-30.

Ohio State bound @iamzedkey has 12 but @tps_hsbb leads 22-14 after 1. Key has scored all his points in the paint

LuHi took the lead for good at 35-33 early in the third on, what else, a paint bucket from Key. The Patrick School offense revolved mainly around isolation plays by Kuminga down the stretch as their ball movement took a hit. Kuminga was able to get to the foul line numerous times down the stretch and, despite chants of “Over-rated” from the LuHi students, he closed the gap to 62-60 by making 1-of-2 free throws with 33.9 seconds left. He finished with 24 points. “You have to have chemistry and one of the things about our guys, as talented as they are, they gotta learn to play the game of basketball, understand possession, time, score, where to be and who gets the ball,” Chavannes said. “That was a problem throughout the game, but more so at the end of the game.” Key was fouled on three straight possessions and went a perfect 6-of-6 from the line in the final seconds. “Oh man, I’ll tell you what, Zed Key has been on a different level since about Christmastime,” LuHi coach John Buck said. “We went away to Hawaii and the first night he played not up to his standard and we really challenged him and ever since that moment he’s been electric. “He’s one of the best big guys in the country, I think.” Buck, who played at Wake Forest, said Key’s game can “expand to the three” at the next level, where he’ll be “a special player.” “He’s a wonderful kid, not once has he ever given me attitude once. And he wants to be a great teammate. He loves his teammates. He’s super-proud to be at LuHi and I know he’ll be super-proud to be at Ohio State and try to help them win.” Follow Adam Zagoria on Twitter And Like ZAGS on Facebook