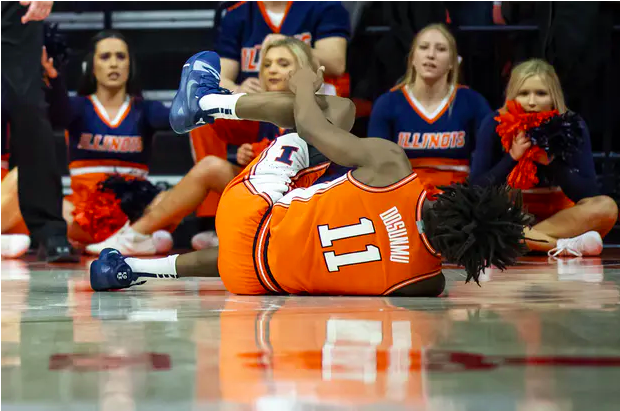 By JACOB POLACHECK An MRI revealed Illinois star sophomore guard Ayo Dosunmu suffered “no structural damage” to his injured left leg Wednesday. llinois released no timeline for his return. “What happened with Ayo last night is as difficult a situation as you’ll see a young man go through, and a feeling where the outcome of the game goes from primary to secondary in a split second,” Illinois coach Brad Underwood said in a statement. “We received positive news today from the MRI scan. Our medical staff will work with him around the clock on treatment and recovery. Ayo and his family have been overwhelmed by the outpouring of support from Illini Nation and college basketball fans everywhere.” Dosunmu is the team’s leading scorer with 15.8 points. The Illini, who are looking to make their first NCAA Tournament since 2013, lost their third consecutive game Tuesday to fall to 16-8 overall and 8-5 in the Big Ten. Illinois will bring in 2020 point guard Andre Curbelo next season. Curbelo scored 23 points for Long Island Lutheran on Saturday to lead his team to an 86-74 win over Sierra Canyon (CA) at the Metro Classic. Photo: Gorski/USA Today Sports Follow Jacob on Twitter Follow Adam Zagoria on Twitter And Like ZAGS on Facebook