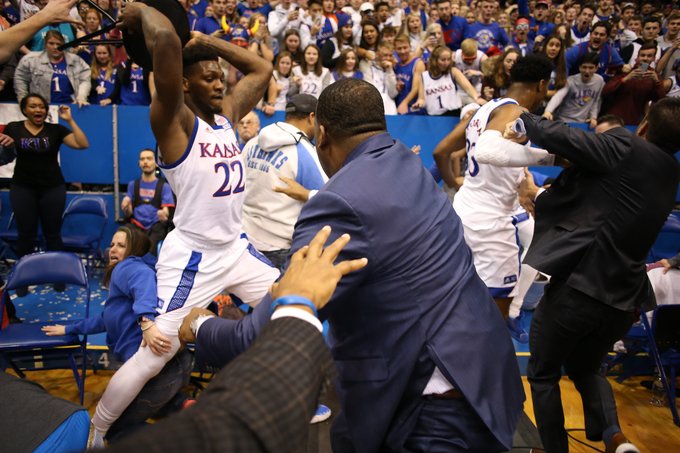 By JACOB POLACHECK Kansas forward Silvio De Sousa was suspended 12 games for his role in the brawl between the Jayhawks and Kansas State on Tuesday. De Sousa was already suspended indefinitely by Jayhawks coach Bill Self on Wednesday. “Chancellor [Douglas] Girod, Jeff Long and I fully support the decision by the Big 12 Conference and appreciate their commitment to working through this situation with us,” Self said in a statement released on Wednesday. “Like I said last night, I am disappointed and embarrassed by what transpired because there is no place for that type of behavior in any competition.” “After meeting with my team and discussing the incident in detail, it is evident that everyone fully understands the magnitude of their actions and all are remorseful for what occurred. We represent the University of Kansas and will all learn from this experience moving forward.” De Sousa released a statement apologizing for his actions Wednesday. The Big 12 Conference also gave Kansas sophomore big man David McCormack a two-game suspension after Self had to pull him away from stepping on a Kansas State player during the brawl. Kansas State junior forward James Love III was suspended eight games for his role in the incident. The Wildcats’ Antonio Gordon (three games) and Dajuan Gordon (two games) were also handed suspensions. None of the other players who left the bench were suspended at all. At the end of No. 3 Kansas’ 81-60 victory, De Sousa was stripped by Kansas State’s DaJuan Gordon near midcourt and Gordon tried to go in for a layup. The Jayhawks’ big man recovered and blocked his shot, sending Gordon to the floor, then stood over him barking. That triggered benches to empty and punches to be thrown in what turned into a brawl. At one point, De Sousa picked up a stool and held it above his head, looking like he was about to swing it at a Kansas State player before assistant coach Jerrance Howard grabbed it from him. McCormack and Jayhawks wing Marcus Garrett were also in the middle of the action with the Wildcats’ James Love and David Sloan, who was the first player to come to Gordon’s defense. Self had to pull McCormack away from stepping on a Kansas State player. Adding to the bizarre finish, both teams were summoned back from the locker rooms by the officials and one-tenth of a second was put on the clock as Kansas State shot free throws to a chorus of boos from the few thousand fans who were still in the arena. With Tuesday’s win, Kansas moved to 15–3 (5–1 Big 12) on the season. The Jayhawks will play Tennessee on Saturday at home in the Big 12/SEC Challenge. With the Big 12’s ruling, De Sousa would not be able to return to the lineup until KU’s regular-season finale, on March 7 at Texas Tech. Kansas will play Kansas State one more time this season as the two schools face off on the Wildcats’ home court on Feb. 29.  This story has been updated. Follow Jacob on Twitter Follow Adam Zagoria on Twitter And Like ZAGS on Facebook