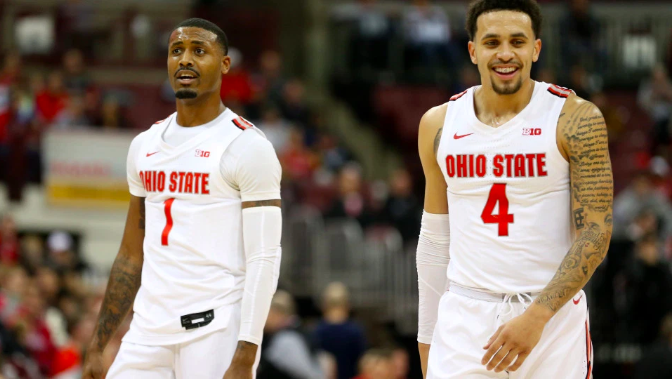 By JACOB POLACHECK Ohio State head coach Chris Holtmann has suspended sophomore guards Luther Muhammad and Duane Washington Jr. for Tuesday night’s game against Nebraska for a failure to meet program standards and expectations, Ohio State Associate Athletics Director Dan Wallenberg tweeted Tuesday. Point guards CJ Walker and DJ Carton are expected to start for the Buckeyes on Tuesday. Washington, who has started 11 games, averages 10.7 points per game, the second-most on the team. He has hit 43.1 percent of his shots, including 43.9 percent of his 3-pointers. He missed two games in mid-December due to a rib injury. This season, Muhammad has averaged 6.5 points, 1.6 rebounds and 1.4 rebounds in 24 minutes per game, while hitting 37.2 percent of his shots, including 34.6 percent of his 3-pointers. Ohio State enters Tuesday on a four-game losing streak after falling to West Virginia, Wisconsin, Maryland and most recently Indiana on Saturday. The Buckeyes have fallen from as high of a No. 2 ranking in the AP Poll to No. 21 in the latest rankings released on Monday. Follow Jacob on Twitter Follow Adam Zagoria on Twitter And Like ZAGS on Facebook

Clemson pulls off the upset over No. 3 ranked Duke