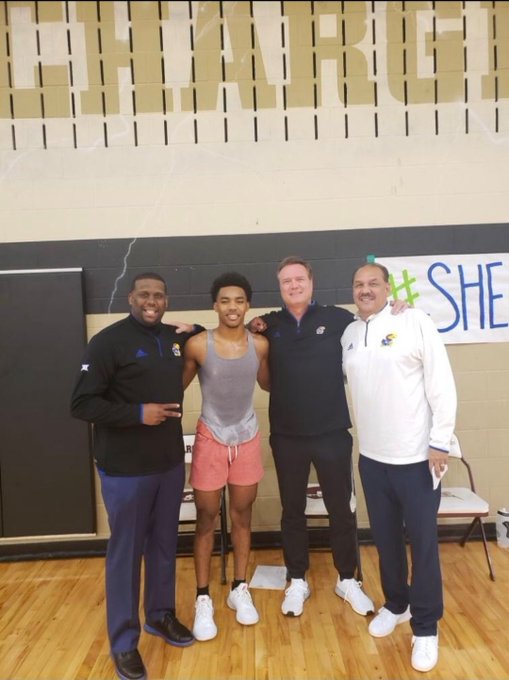 By JACOB POLACHECK Latrell Jossell, the 6-foot point guard from Keller Central (TX) and the adidas YGC36 AAU program, has committed to Kansas, he told ZAGSBLOG Thursday. “It’s Kansas,” he said by phone. “It came down to where they come from and the atmosphere it brings.” Jossell took an unofficial visit to Kansas for “Late Night in the Phog” on Oct. 4. “It wasn’t even a real game,” Jossell said about his visit. “But just by how packed it was and how loud it was, it was crazy. That was a big factor.” Jossell picked up an offer from the Jayhawks on Wednesday and will be signing his National Letter of Intent on Friday at 8am Central Time. “Going based off my talks with Bill [Self] and the other coaches, as well as watching games over recent years, he likes to work with multiple guards,” Jossell said. “I know that even if he’s bringing in a lot of guards, I wouldn’t necessarily have to sit on the bench.  I could play with them, with two guards.” Jossell becomes the fourth signee in the Jayhawks 2020 class, joining five-star guard Bryce Thompson, junior college guard Tyon Grant-Foster and four-star center Gethro Muscadin. He also held an offer from Dallas Baptist. Jossell and Muscadin have played together on the adidas circuit with YGC36 Basketball. “You usually go into college not knowing anyone, but right off the bat, I’ve got one of my teammates that I’ve been playing with throughout the whole summer,” said Jossell. “It was perfectly set up.” Jossell broke down what he’ll bring to this Kansas team. “I bring a lot of energy when I play. That’s my main thing,” he said. “When I play, I play with a lot of heart and energy. I’ll dive on the floor, go for steals.” Follow Jacob on Twitter Follow Adam Zagoria on Twitter And Like ZAGS on Facebook