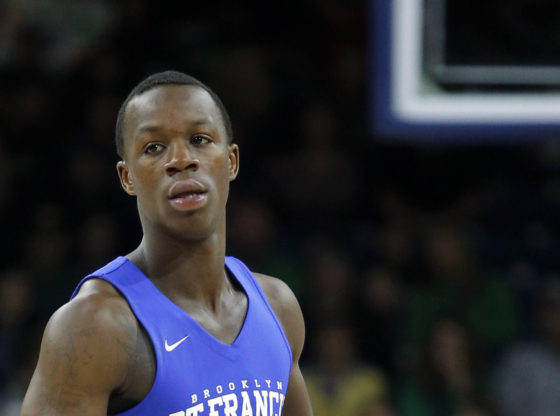 St. John’s on Tuesday officially announced the addition of Cleveland State transfer Rasheem Dunn, a 6-foot-2 guard who played with Shamorie Ponds at Thomas Jefferson High School when they won the 2016 PSAL and New York State Federation titles. Dunn must complete one full academic year of residency before the Red Storm per NCAA rules. He is expected to apply for a hardship waiver in order to gain immediate eligibility after sitting out last season at Cleveland State. “We’re thrilled to welcome Rasheem to our family here at St. John’s,” said head coach Mike Anderson.  “He’s certainly no stranger to the area and we believe that his maturity and natural scoring ability will serve the program well moving forward.” his arrival at Cleveland State, Dunn spent two seasons at St. Francis Brooklyn under head coach Glenn . As a sophomore in 2017-18, Dunn earned Second Team after averaging a team-high 15.4 points in 30 games, 29 of starts. The 6-foot-2 shooting guard, who eclipsed the 20-point plateau 11 times, also added 5.7 boards, 2.3 1.8 steals per contest, leading the team in rebounding and finishing second on the squad in assists.  He was one of just in the NEC to rank in the top 10 league-wide in both rebounding. During that sophomore season, Dunn helped orchestrate a dramatic turnaround for the Terriers.  After going just 4-27 with a 2-16 record in NEC action during Dunn’s freshman campaign, St. Francis went 10-8 during conference play in 2017-18, good enough for a fourth place finish in the NEC regular season standings. As a freshman, Dunn proved to be a bright spot for the Terriers during that 4-27 campaign, leading the team in scoring at 13.1 points per game.  His 394 points on the season were a St. Francis freshman record for the NEC era while his 112 made free throws were a program freshman record overall.  He also led the team in rebounding and steals while garnering NEC Rookie of the Week accolades three separate times.  He scored 20 or more points on six separate occasions, becoming the first Terrier to score 20-plus points in a game since 2009. enrolling at St. Francis, Dunn and Ponds completed one of the runs in the recent memory of New York City High School Basketball as seniors in the spring of 2016.  were named Co-MVPs of the PSAL Championship Game at Madison Square Garden, as Ponds poured in 31 points and Dunn added 23 in a 29-point rout of city power Abraham Lincoln High School.  The pair would then go on to lead the Orange Wave to a New York State Class AA Federation Title, as Ponds was named the Tournament MVP and Dunn earned a spot on the All-Tournament Team.  Dunn scored a team-high 21 points in the title game over Aquinas Institute. Follow Adam Zagoria on Twitter And like ZAGS on Facebook