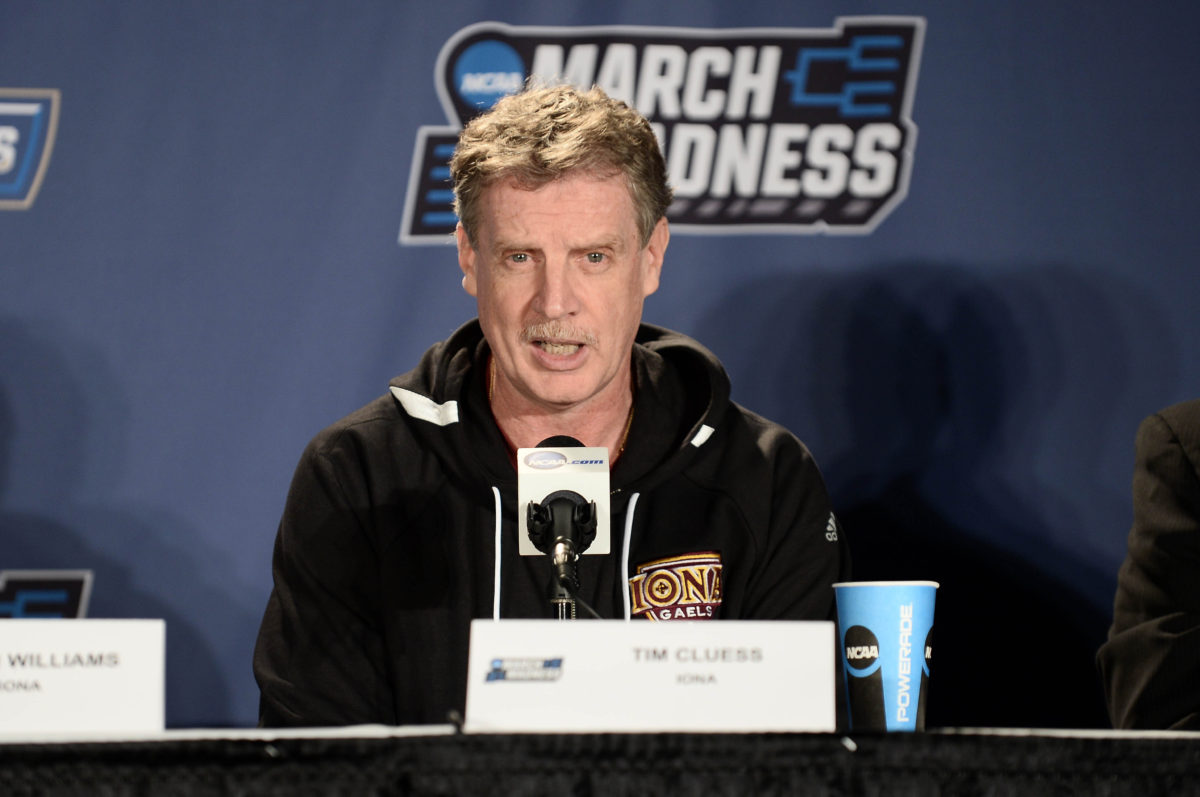 By ADAM ZAGORIA In the latest development in the ongoing St. John’s saga, Iona coach Tim Cluess has withdrawn his name from consideration for what many said was his “dream job.” “I would like to start by thanking everyone for all their support,” Cluess, 60, said in a statement via text. “I am truly blessed to have so many people say so many nice things. “I am, however, taking my name out of consideration for the St. John’s job. “When I was unexpectedly contacted by them last week it opened up a flood of emotions. For those of you who have ever lost a loved one you know that there are special places , trinkets and memories that keep them alive in your heart and soul. “St. John’s was one of those key places where my love for family has been a part of my life since my earliest memories. “In my heart the thought of reestablishing the connection to my brothers Kevin and Greg through the possible opportunity to coach at St. John’s and the chance to help bring back their rich tradition in the process made it hard to walk away from. “There comes a point where the reality of the situation becomes more clear and moving forward is what is needed. “I love my players at Iona and being a coach there and I am truly blessed to be able to do what I love at a place I love. I look forward to continuing to grow the Iona program to higher levels.” St. John’s had intial contact with Cluess after parting ways with Chris Mullin on April 9, but never formally offered him the job. It’s unclear exactly why. Cluess has a buyout that is thought to be north of $2 million — with one source saying it’s as high as $4 million. Others suggested legendary St. John’s coach Lou Carnesecca still holds a grudge against Cluess for some ancient beef. Either way, Cluess is now the latest coach to either say no to St. John’s flat out or pull out of consideration, following Arizona State’s Bobby Hurley, Loyola’s Porter Moser and UMBC’s Ryan Odom. Yale’s James Jones will interview Thursday.

Live look at every coach @StJohnsBBall has approached in this search. pic.twitter.com/RB91PJZ728

“[Cluess]would walk from New Rochelle to Queens tomorrow,” influential St. John’s alum Mike Repole said Wednesday on Mike Francesa’s show. “Cluess met with St. John’s, he said the meeting went great, he was telling people his plan for players,” he added. “This is his dream job. At every single level, this guy’s been a winner. Iona’s been to more NCAA Tournaments in the last 20 years than St. John’s.” Cluess played at St. John’s and Hofstra and is 297-131 (.694) as a head coach. He has taken Iona to six NCAA Tournaments in nine years, including the last four but has yet to win an NCAA Tournament game. Iona is often a bottom-tier seed because it plays in the MAAC.

“We are extremely proud of Tim Cluess and how he represents our program,” Iona AD Matthew Glovaski said in a statement. “He has elevated Iona men’s basketball and put us into the national spotlight on an annual basis and we are thankful for all of his hard work and dedication. We look forward to continued success with Tim Cluess as the leader of our basketball program.”

“The unprecedented success of Iona men’s basketball under Tim Cluess’ leadership – both academically and athletically – is remarkable,” said President Joseph E. Nyre. “Tim Cluess is an incredible coach and person and we look forward to his continued leadership, continued growth of the men’s basketball program and his ability to Fight the Good Fight.”

Meantime, the clock is ticking at St. John’s. The NCAA late signing period began Wednesday and the first live recruiting period is April 26-28. St. John’s has already lost several players from its roster, including juniors Shamorie Ponds and Justin Simon, who declared for the NBA Draft, while freshman Bryan Trimble and sophomore L.J. Figueroa have entered the transfer portal. Class of 2019 junior college recruits Cam Mack and Valdir Manuel have both re-opened their recruitments. “They need to make a hire before Easter weekend,” one source said. Follow Adam Zagoria on Twitter And like ZAGS on Facebook