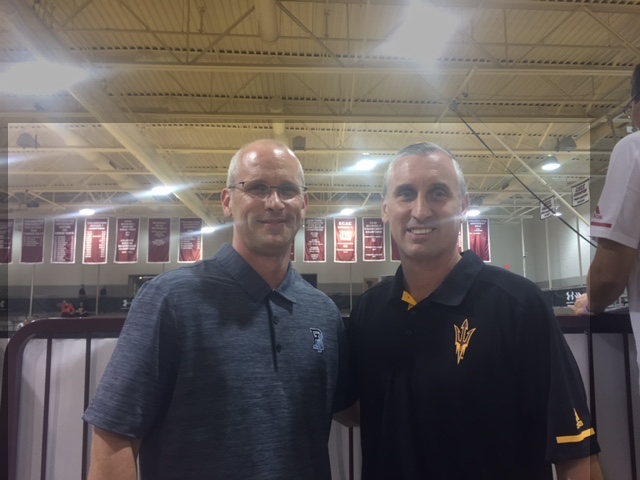 By ADAM ZAGORIA ROSELLE, N.J. — Dan Hurley is glad the Bobby Hurley drama is over. During the past week, as the Bobby Hurley-to-St. John’s rumors heated up, Dan Hurley’s phone blew up. Reporters, coaches, everybody wanted to know what was going on with his brother. “I just think the coaching carousel is not all it’s cracked up to be,” Dan Hurley said with a laugh Friday at the New Jersey Coaches Clinic at Roselle Catholic High School. “When I’ve dealt with things in the past, it’s stressful for both of us because it’s like a big life change. So I’m just kind of happy it’s been resolved.” Ironically, Dan Hurley was linked to the St. John’s opening in 2015 when Steve Lavin was let go. This time around, after Chris Mullin and the school parted ways, Bobby Hurley was the top target, but he ultimately agreed to a contract extension with Arizona State. St. John’s is now in flux with Tim Cluess, Ryan Odom, Porter Moser and St. John’s assistant Greg St. Jean among those in the mix. “What [Bobby] has built there [at ASU], the things he still wants to accomplish there, I think he feels like there’s still so much more he wants to accomplish at Arizona State,” Dan said. The two brothers are extremely tight, but Dan didn’t bug his brother too much in the last week on this. “When you’re going through something like that, you kind of only reach out sporadically,” he said. “You kind of let it happen organically. So I didn’t talk to him a whole lot while this was going on. Plus, I got my hands full with my own stuff.”

As for his “own stuff,” Hurley wants UConn to make a jump in Year 2 after finishing 16-17 and in ninth place in the American. “We have to keep making strides, we have to keep increasing the talent level,” he said. The Huskies lose Jalen Adams but return the rest of the team, and add recruits James Bouknight, Jalen Gaffney and Akok Akok. “For us it’s put together another talented recruiting class like we just did with the three top 100 kids and keep adding to our talent base. And the guys that are in the program have to take big jumps in their career next year,” Hurley said. Hurley is looking for the incoming freshmen to play key roles. “We love their talent, skills and upside but there’s a reason why most of the teams that do really, really well in college are older, so there’ll be some tough nights and some learning experiences,” he said. “But positionally in terms of their talent I thought we got two guys [Bouknight and Gaffney] who could be as good a tandem as anyone will have down the road.” Akok joined the  team for practice in January and will suit up this fall. “You got that stretch four man that can block shots and is super-athletic and can make threes,” he said. “You have to have a four man that can spread the court around the one big and three other skilled perimeter people because that’s the style I like coaching and the way the game is heading.” Meantime, 2020 will be another big recruiting class for the Huskies. They are targeting several people, including super-athletic 6-11 Roselle Catholic big man Cliff Omoruyi, who on Friday added a Kentucky offer after meeting with John Calipari and also met with Auburn’s Bruce Pearl and Pitt’s Jeff Capel. Hurley will return to see him next week. UConn is also involved for 2020 Westtown power forward Noah Collier, 2020 Oak Hill Academy wing Cam Thomas, 2020 Putnam Science shooting guard Demarr Langford and 2020 Putnam point guard Hassan Diara. Hurley and assistant Kimani Young were at Putnam on Friday. “It’s a big class for us,” Hurley said, speaking generally. “We have to generally continue to get UConn-level talent and then positionally I think center is a real big spot for us with Josh Carlton graduating soon. We need a big-time center and big I think big wings are important.”

Bobby Hurley is staying at Arizona State; Iona says it hasn't been contacted by St. John's